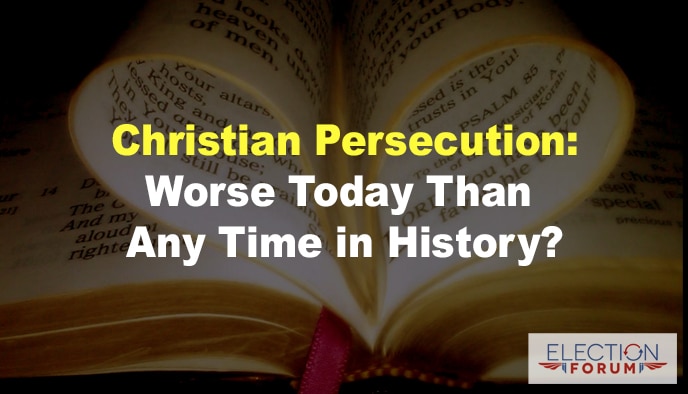 When has physical persecution of Christians been the worst ever?

Christians being thrown to the lions in the Roman Coliseum in the 1st century?

Christians burned at the stake for translating the Bible during the Middle Ages?

A new report from a persecution charity group shows that Christian persecution is actually worse today than ever before in recorded history.

This is partly due to terrorist groups like ISIS in the Middle East and Boko Haram in Nigeria targeting and murdering Christians – basically committing genocide.

Not so well known is the increase in Christian persecution in many other countries due to the rise of various forms of religious nationalism … which seeks to eliminate Christianity while promoting the national religion:

In China, Christian persecution has escalated dramatically over the past 5 years – since President Xi Jinping came to power – compared to the last 5 years of the previous administration.

Here is a brief summary of some of the recent incidents you probably haven’t heard about:

China forces women to have abortions … encourages infanticide … and executes more people every year than any other country on earth.

China harasses, detains, tortures and disappears followers of all religions – and those who openly criticize the government – on a regular basis.

And a Vatican official in Rome says that China is “best implementing the social doctrine of the Church.”

Clearly, the Vatican wants to mend its previously fractured relationship with China.

As Christians, we all should remember what the Apostle Paul said in 1 Corinthians 12:26 … “If one part [of the Body of Christ] suffers, every part suffers with it.”

Please pray for the persecuted Christians in China as well as in North Korea, the Middle East, and around the world.

One Comment on “Christian Persecution: Worse Today Than Any Time in History?”