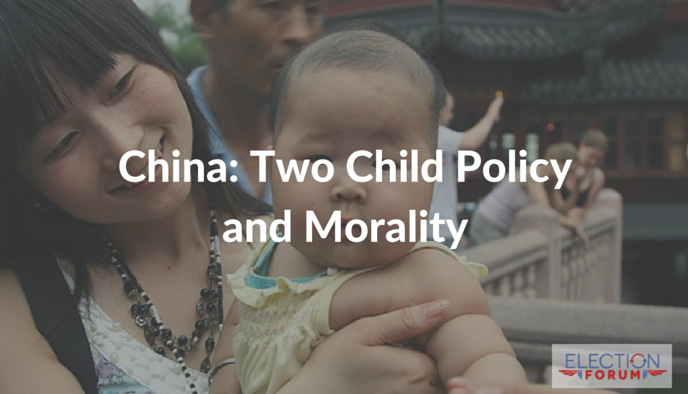 China has finally realized that its one child policy is having negative consequences on the nation’s economy and society.

So, China has announced that it is revising its infamous one-child policy: married Chinese couples are now allowed to have two children.

But this change in policy is due solely to that – economic calculations and state control over women’s reproduction, according to what it feels is needed.

Tragically, this change did not take place because China’s communist leaders have developed an awareness of human rights, of right or wrong. They still do not recognize the sanctity of life, the dignity of women, or the fundamental right of parents to make their own reproductive choices.

China’s one-child policy does have incredible economic consequences. But it is fundamentally a moral problem, not an economic one. It is evil – and while allowing two children is better than one, this forced limitation still has the same problems.

The one-child policy has been brutally enforced in China over the past 35 years. China’s Ministry of Health estimated in 2013 that 336 million babies had been aborted in compliance with this policy.

There are approximately 13 million abortions in China every year, and the number is likely higher today.

A two-child policy will not end this horrific evil of forced abortions and forced sterilizations. Women who have conceived a third child will still be forcibly seized and their babies killed without their consent.

And there are more social problems caused by this policy. Sex-selective abortions are epidemic, and millions of unborn baby girls are aborted because of the strong preference for sons in Chinese culture.

There are now 50 million more men than women in China. This shortage in women is resulting in an increase in prostitution and human trafficking of foreign women.

When the Chinese state sees that the population is in desperate need of growth, what is to stop it from mandating childbearing? It wouldn’t be hard to switch from forcibly aborting women’s children and forcibly sterilizing them to, instead, forcibly inseminating women.