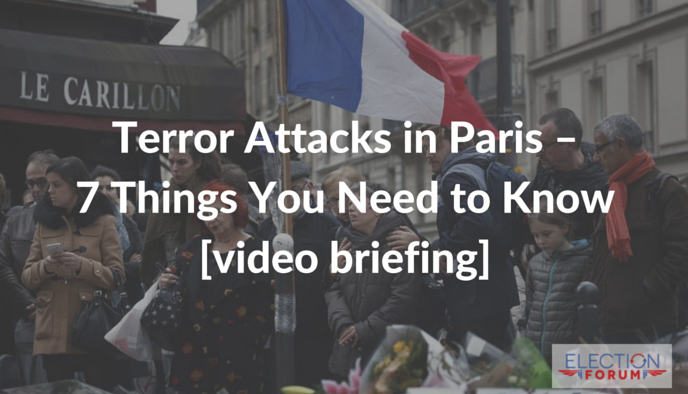 To compound the problem, President Obama and liberal politicians are denying the reality and misleading the public.

So, in light of the recent terror attacks in Paris and what the politicians are saying, here are 7 things you need to know about the rise of radical Islam:

From the Quran, 9:5: “When the forbidden months are past, then fight and slay the Pagans wherever ye find them, and seize them, beleaguer them, and lie in wait for them in every stratagem (of war); but if they repent, and establish regular prayers and practice regular charity, then open the way for them: for Allah is Oft-forgiving, Most Merciful.”

Sunnah 9:29 says “Fight those who do not believe in Allah… until they pay the Jizya [tax] in acknowledgement of superiority and they are in a state of subjection.” The next verse says “May Allah destroy the (Christians and the Jews).”

“The punishment of those who wage war against Allah and His Messenger, and strive with might and main for mischief through the land is: execution, or crucifixion, or the cutting off of hands and feet from opposite sides, or exile from the land: that is their disgrace in this world, and a heavy punishment is theirs in the Hereafter” (Sura 5:33).

Not all Muslims condone the pursuit of “jihad” against unbelievers; many speak out against it. However, those that are peaceful are so despite the Quran and Muhammad, not because of it.

All Muslims agree everyone should live under Sharia law. Some believe by persuasion. Some by force. Those who advocate peace are really inconsistent with the full teachings of the Quran.

Far too many Muslims sympathize with the violent interpretation of Islam. It’s estimated there are 150 million radical Muslims, and that number is growing.

Nothing can be done to make Islam peaceful: The Quran commands world domination, imposition of Sharia law over all, and the elimination of Christianity, freedom and free enterprise.

Muslims who are peaceful are so despite their religion, not because of it. Again, if Muslims adhere to the full teachings of the Quran and their holy texts (teachings of Muhammad, etc.), then they must believe in jihad – the violent imposition of Sharia law over all.

Aside from the teachings of Islam, here is added evidence that ISIS and radical Islam is in line with the essence of Islamic theology:

Egypt’s Al-Azhar, the official considered by many Muslims to be the highest authority in Islamic thought, issued a statement in December 2014 refusing to declare ISIS apostates. He said: “No believer can be declared an apostate, regardless of his sins.”

Furthermore, the Al-Azhar mosque and university in Cairo – centers of Islamic learning – adhere to essentially the same philosophies as ISIS. While some Muslims called for a “religious revolution” against certain texts (which advocate jihad against unbelievers), this center of learning maintains these texts cannot be criticized or treated as anything other than holy revelation.

To those who say that ISIS isn’t truly Islamic but uses the religion as a cover for violent inclinations: ISIS embraces Islam’s full teachings, upholds the sacredness of ALL their holy texts (which “peaceful” Muslims would effectively renounce), and adheres to the same interpretation accepted by many of the highest authorities in Islamic theology.

The violence of ISIS and radical Muslims is not foreign to Islamic theology – it is central to it.

While liberals like to emphasize moral equivalence and say that all religions are created equal – excluding bigoted Christians, of course – that couldn’t be further from the truth.

At this time, more Muslims are converting to Christianity than ever before in history. The radical Islam movement is Satan’s desperate retaliation against this kingdom growth.

And France is being repeatedly struck at a time when spiritual revival is occurring there.

While these attacks are evil and disastrous, they point to something good – the work of God. Satan will always try to tear down the work of God – but he will not succeed, for Christ has overcome the world (John 16:33). Christ has defeated Satan – and the kingdom of God will not be thwarted.

Pray for spiritual revival in France.

What happened in Paris could happen anywhere. We must live every day unto God.

We are to live as children of the day, expecting Jesus’ return at anytime. Share the gospel with unsaved friends, family and acquaintances and pray for their salvation.

Pray for God to raise up ambassadors in Christ.

Here are some must-see videos on ISIS’ terrorism, the need to screen refugees, the danger of nuclear capabilities, and more:

The failure of American leadership needs to change. As the 2016 election draws near, pray that God will raise up a leader who will fight evil.

And evaluate the Presidential candidates for their strength in foreign policy. Remember that the next President needs to be first and foremost a Commander in Chief – a protector of national security and a leader in fighting the evil of global terrorism.