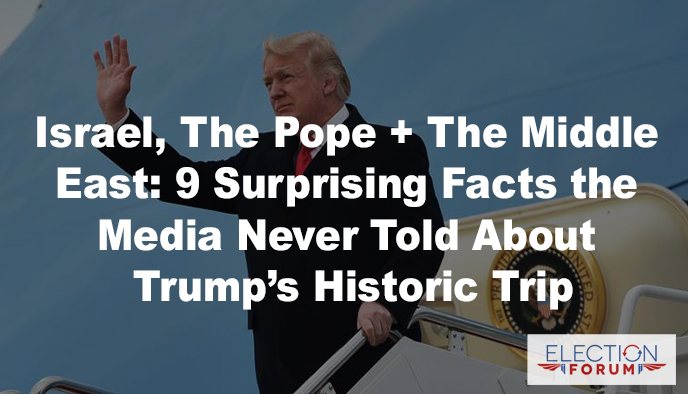 Trump’s historic and first trip abroad received harsh criticism from the liberal press and important events were not reported.

Here are 9 things you should know that may surprise you:

Israel is a very small country.  When you go to the Holy Land, you discover it’s about the size of New Jersey. It’s about 300 miles long and about75 miles wide.

There are about 6.5 million Jews and 1.5 million Arabs within its borders.

It’s been under siege from those who want to destroy it. In fact, 350 million Arabs surround Israel…many wanting to wipe out all Jews.

And most every nation in the world wants to divide the city of Jerusalem and give Judea and Samaria as a future Palestinian State.

For the  last 8 years under President Obama, Israel has been marginalized, betrayed and undermined.

But President Trump made it clear, that’s changed.

A major shift in policy President Trump said, “ I make this promise to you: My administration will always stand with Israel.”

President Trump became the first sitting President to visit the Western Wall. This was a huge statement, as it’s seen throughout the world as Judaism’s holiest site.

Further, the Press Conference was publicly held in “Jerusalem, Israel” – a huge shift in US policy.

Trump also visited the Holy Sepulcher believed by many to be the site of the crucifixion of Christ.

Also, one outing in Israel that the media “conveniently” missed:

Although the president’s 27-hours in Israel was packed and planned out, he still made time to fulfill a wish of a 14-year-old who heard he was coming to her country. Emilee Imbar has been battling cancer for the last seven years, and has dreamed of meeting with the U.S. President. As eager as she was to see him, Trump was reportedly eager to meet this special little girl. They chatted and Emilee presented him with a letter she wrote expressing her desire to meet him again – this time in the White House, where she hoped to do business with him, and maybe even to bring peace to the world.

The entire media, besides the local news outlet, ignored this incredible story and act of love from our president since it’s counter to their narrative.

President Trump made it crystal clear, “Peace can never take root in an environment where violence is tolerated, funded and even rewarded.”

3. Israel Promises not yet fulfilled.

The President promised to move the U.S. embassy from Tel Aviv to Jerusalem. For practical reasons, this has not yet been done.

4. The Trip to Saudi Arabia was stunning.

5. To the leaders and the Muslim world, Trump even mentioned the persecuted Christians now facing genocide.

“Stand together against the murder of innocent Muslims, the oppression of women, the persecution of Jews, and the slaughter of Christians.”

6.  Trump called out Iran’s threat to the U.S., Israel and the World.

Iran is the #1 terrorist state funding and helping terrorists. They are on a path to nuclear weapons, thanks to the Obama Iran deal.

Here is what Trump said,

7. The Pope and the liberal media.

As President Trump shared a private audience in the Vatican with Pope Francis, a picture taken during their time together shows a smiling president next to a somber-faced Pope.

Evan Vucci recalled: “The mood in the room, it didn’t seem somber. The Pope was smiling. They were sort of talking. Nothing seemed unusual to me or out of the ordinary.”

The media portrayed the meeting with the Pope as one of tension and confrontation, but all other pictures from their meeting show the Pope and the President smiling as they talked and exchanged gifts.

And the President blasted the European nations on their neglect of financially supporting NATO. In front of them all – and the world – the President with force and truth said,

“These grave security concerns are the same reason that I have been very, very direct with Secretary Stoltenberg and members of the Alliance in saying that NATO members must finally contribute their fair share and meet their financial obligations, for 23 of the 28 member nations are still not paying what they should be paying and what they’re supposed to be paying for their defense.

This is not fair to the people and taxpayers of the United States.  And many of these nations owe massive amounts of money from past years and not paying in those past years.  Over the last eight years, the United States spent more on defense than all other NATO countries combined.  If all NATO members had spent just 2 percent of their GDP on defense last year, we would have had another $119 billion for our collective defense and for the financing of additional NATO reserves.”

The liberal media did three things with all 8 of the above:

Bottom line: it was a successful start that reasserted America’s leadership in a world turned upside down.

And as we see events unfold, let us not forget God is in control.

In the book of Zechariah, we read the entire world will come against Israel in the end times. The center of the conflict: Jerusalem. Maranatha!