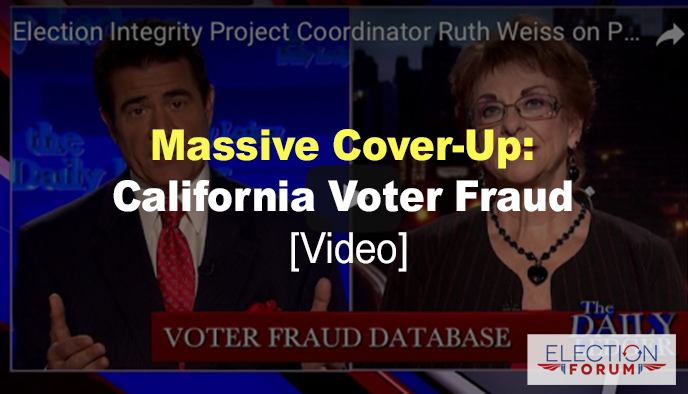 California’s Secretary of State Alex Padilla is covering up illegal voting and incompetence within his own office.

Padilla says voter fraud in the state does not exist.

He has 90 days to clean up the state’s voter rolls or face a lawsuit.

As I’ve said for years, voter fraud is rampant.

I’ve seen it with my own eyes.

The EIP has uncovered powerful statistics for the first time:

This is a crime. And it strikes at the heart of a democratic Republic.

“Of course, they say it doesn’t exist, but that’s just a denial of reality,” said EIP’s Ruth Weiss.

The Heritage Foundation lists at least 1,000 cases that have been prosecuted. Click here to see their documented fraud cases.

In fact, news reports are now saying some 3.5 million more people are registered to vote in the U.S. than are alive among America’s adult citizens.

A possible 5.7 million non-citizens voted in both the 2008 and 2012 elections, according to two research studies:

Also, the Government Accountability Institute has released a bombshell study that concluded thousands of votes in the 2016 election were illegal duplicate votes from people registered and voting in more than one state.

And yet when GOP governor Rick Scott tried to update Florida’s records, including deleting 51,308 deceased voters, Obama’s Justice Department filed a federal lawsuit to stop him.

California is the worst of all the states, fueled by its ease to register and vote with no accountability.

Using the voter records of Los Angeles County, whose population is larger than 15 states, EIP uncovered:

20,000 deceased still on voting roles, some who are still voting

12,000 are registered more than one time — sometimes as many as 8 times — in the same county, who can vote multiple times using alias addresses and mail-in ballots.

In California, if you combine an estimated 5 million inactive registrants, who have typically died or moved out state, with the state’s lack of voter ID requirements, you have a scenario ripe for fraud.

Deroy Murdock, a contributing editor with the National Review, said that of 3.7 million illegal votes in the 2016 election, 1.5 million came from California.

When I ran for office, we were shocked by thousands of new registered voters – people who never voted before – came out and voted Democrat in areas where few ever voted.

Voter fraud must be stopped to ensure true elections.

We need to rescind the National Voter Registration Act of 1993, also known as Motor Voter in California.

That law stipulates that people interacting with government agencies, state or federal, be offered a voter registration form.

The NVRA and CNVRA require only “on your honor” verification of citizenship. It means:

California issues drivers licenses to illegal aliens. Since the law went into effect in 2015, over 800,000 illegal immigrants have received a license. How many actually registered to vote?

Is it any wonder voter fraud exists to such an extent in this state?

Time and again, the names of the deceased have been found to have voted, usually for a Democrat.

This is why the hue and cry against Voter ID laws comes from liberals, who disingenuously argue such a law would keep the poor from the voting booth.

That’s total nonsense, and yet liberals play the race card every time the subject is brought up.

There is nothing nefarious about Voter ID.

You need a driver’s license to drive.

You need ID to cash a check.

A Voter ID just proves you are who you say you are when you want to cast your ballot.

It would not prevent any legitimate voter from casting their ballot.

Did you know about 2.8 million people are registered to vote in two or more states?

The commission has asked states to send in public information on voting. You can see why many states – including California — are refusing to release their voter roles for verification.

Did you know the dead can vote? Here are some worthy statistics: