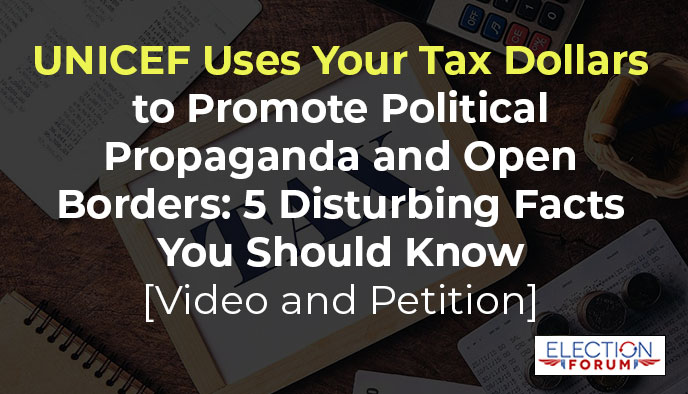 UNICEF is supposed to be helping children…

But instead, it’s spreading falsehoods and promoting anti-border-protection propaganda.

It’s offensive to those who want to secure and protect our borders and our national sovereignty.

It’s offensive to taxpayers who are paying for this anti-American propaganda.

Here are 5 disturbing facts about UNICEF you should know:

The ad is powerful and well done … but it is pure United Nations propaganda.

When the ad began running, UNICEF said this on Twitter:

“Migrant and refugee children are children first and foremost. Their rights do not end when they cross a border.”

Watch the ad, it’s a little over one minute.

It was created in 1946 as the United Nations International Children’s Emergency Fund … to help children in war-torn Europe, China and the Middle East.

It now operates in 190 countries, providing, among other things:

For the past 40 years, UNICEF has been very political … very corrupt … and very inefficient.

The UNICEF USA web site says, “UNICEF is the global leader in providing children an opportunity for a childhood and a chance to live up to their full potential.”

UNICEF wants to overrule all of these authorities and make raising children a socialist utopian goal of worldwide government.

They also have heavily increased their advocacy for child migrants and “refugees” from Central America to be permitted to freely cross the border from Mexico into the U.S. without being detained or separated from their “families.”

The group has the audacity to boldly attempt to rally support to keep the U.S. taxpayer money flowing…

“A child in need knows no politics! That is why we ask the U.S. Congress to maintain the Government contribution to UNICEF at $132.5 million for FY 2020, the same level approved by Congress for FY 2019. We don’t want funding for UNICEF to be cut.”

1. Sign our petition to defund and withdraw from the U.N. here.
2. Don’t contribute your personal funds to UNICEF. There are many private non-profit charities in the U.S. that are doing a better job of helping children than UNICEF. World Vision and Samaritan’s Purse are two examples.
3. Ask your Congressperson and Senators to end government funding of UNICEF.
4. Only support and vote for candidates that will stop this madness of perpetuating the corruption and socialist propaganda of UNICEF.

One Comment on “UNICEF Uses Your Tax Dollars to Promote Political Propaganda and Open Borders: 5 Disturbing Facts You Should Know [Video and Petition]”