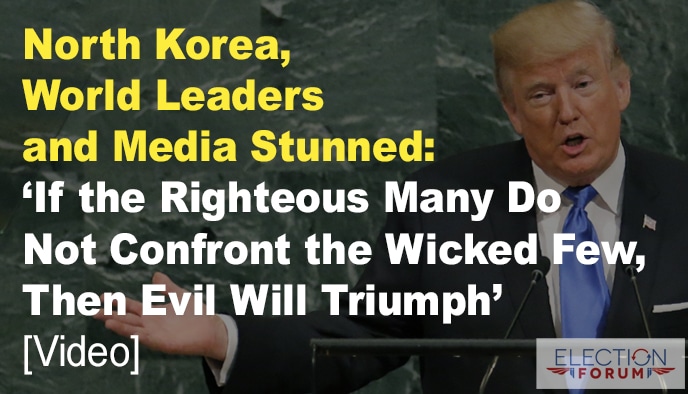 The liberal media, politicians and deep state bureaucrats were stunned when President Trump said what world leaders would not say:

“If the righteous many do not confront the wicked few, then evil will triumph,” he said. “When decent people and nations become bystanders in history, the evil forces only gain strength.”

North Korea, Iran and other rogue regimes were called out for their threats to humanity and to peace.

“The United States has great strength and patience, but if it is forced to defend itself or its allies, we have no choice but to destroy North Korea.”

How’s that for a clear message?

He reminded leaders that North Korea has:

He called on the United Nations to take the lead and disarm North Korea.

And if it doesn’t quickly, the U.S. will act out of our self-interest. No more letting the UN and globalism prevail.

Iran was next to face Trump’s wrath. Trump pointed out that:

He warned that the U.S. may cancel the unfair Iran agreement if that country continues its pace of building a nuclear program.

“It’s one of the worst deals the U.S. has entered into. It’s an embarrassment.”

Trump’s concern for those who cannot defend themselves under brutal regimes, brought to light Psalms 82: 3-4:

Other highlights from the politically incorrect Trump speech:

Trump ended his speech with a call to action.

“Let this be our mission. We will fight together, sacrifice together and stand together for peace, for justice, for freedom and family and for Almighty God who made us all.”

While Trump talked tough against North Korea and Iran, and rightfully so, the President was really on a mission of mercy.

Rescue those who are being taken away to death; hold back those who are stumbling to the slaughter. If you say, “Behold, we did not know this,” does not he who weighs the heart perceive it? Does not he who keeps watch over your soul know it, and will he not repay man according to his work?

Hopefully, Trump’s call to action will be heeded by the UN, but history has proven otherwise.

The UN has proven itself to be anti-Israel and anti-Semitic, backing resolutions designed to punish Israel while pushing the Palestinians into statehood.

The U.S. pays $3 billion a year to the UN, much more than its fair share. Maybe it’s time to defund the UN until it drops its pro-Palestinian, anti-Israel policy.