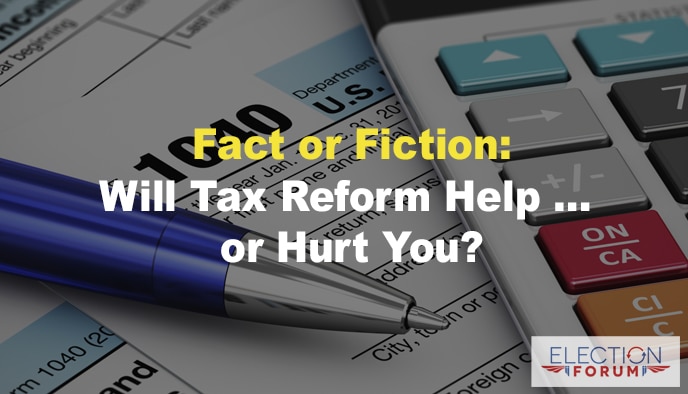 Once more the progressive pro-socialistic politicians and media are portraying tax cuts as only benefiting the rich.

Here is the true fact:

These tax reforms will benefit everyone.

Let’s look at the reality.

First, it puts more money in your pocket … and less money to Washington bureaucrats.

His plan is to simplify the tax code.

Here is how you and average Americans will benefit.

Highlights from Trump’s plan include:

The greatest job creators in the world are the small business owners, of which I am one.

We are trying to run successful businesses and provide for our families, but are being held back by an outdated, complicated tax code.

We must simplify Tax Day to one postcard anyone can fill out without software or a CPA.

Fixing this will strengthen our local economies.

Consider what happens with tax deductions and reform:

When a society realizes how an economy grows – through greater risk taking through innovation, entrepreneurship and investment – it becomes clear that reducing the costs of such risk taking through tax relief is a positive that impacts the entire economy.

HOW MAJOR TAX REFORM IS CRITICAL TO YOU AND YOUR FAMILY

Major tax reform is critical to fueling our country’s economy.

Look what tax cuts did for the creation of new jobs:

These tax breaks would boost the economy because economic activity is dynamic and not static.

As business creates new jobs and products and services, wealth is created for all … that’s the difference between socialism that stagnates welfare for all and a capitalist free enterprise that raises everyone’s standard of living.

And here is more interesting information for you: PAN For Children.

4 Comments on “Fact or Fiction: Will Tax Reform Help … or Hurt You?”