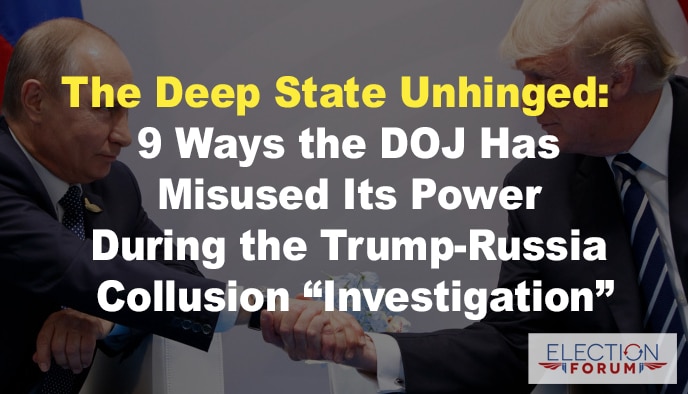 The Department of Justice (DOJ) has missed another deadline to comply with subpoenas issued by the House Permanent Select Committee on Intelligence (HPSCI).

The continual stonewalling of the DOJ has prompted HPSCI chairman Devon Nunes (R-CA) to suggest that President Trump should intervene … which he is hesitant to do – obviously for political reasons.

One of the characteristics of the Deep State is that its operatives insist that they are totally independent … and not subject to any oversight or supervision or accountability.

Here are 9 ways it has abused its authority since the beginning of the so-called Trump-Russia collusion investigation:

The dossier was presented as a verified, reliable intelligence product…

It formed an essential part of the FISA application to spy on Carter Page.

The “evidence” against Carter Page in the dossier came from unnamed, unverified Russian sources…

Former Deputy Director of the FBI Andre McCabe testified that a FISA warrant on Carter Page would not have been sought without the Steele dossier information.

This also abused the FISA process … which required the applicant – the DOJ – to establish probable cause that Page was “an agent of a foreign power.”

The FISA application process requires that the target of a surveillance warrant be engaged in activities that “involve or may involve a violation of the criminal statutes of the United States.”

The Steele dossier’s claim that Carter Page met with 2 specific Russians in Moscow in July 2016 was not corroborated by any independent source prior to the submission of the FISA application.

And the FBI later learned that the “unnamed sources” were actually Christopher Steele himself!

But Steele later admitted publicly that in fact he did have contacts with the press before October 2016 … and this fact was confirmed by Steele’s former business partner Glenn Simpson.

This means one of the following statements must be true:

Crossfire Hurricane was the code name the FBI gave to its investigation of the Trump campaign’s ties to Russia.

In the initial FISA application that was approved in October 2016, the DOJ claimed that the FBI initiated its counterintelligence investigation of the Trump campaign on July 31, 2016.

But specific FBI counterintelligence activities are now known to have begun as early as July 5, 2016.

But as you will see below, the FBI received this information as a result of the investigation it had already begun.

Papadopoulos disclosed to an FBI spy – who was attempting to infiltrate the Trump campaign – that the Russians had damaging information about Hillary Clinton.

But there was never any evidence of “concerted efforts” to coordinate or collude between Papadopoulos and Russia.

Congressman Adam Schiff’s (D-CA) memo regarding the findings of the HPSCI indicated that the FISA application directly connected Papadopoulos to the alleged Russian hack of the DNC emails.

In fact, he had no knowledge of any Russian hacking at the time he was alleged to have been directly connected to it.

Material facts concerning past efforts by Russian intelligence agents to target Carter Page for recruitment were withheld from the FISA court.

Page had voluntarily spoken to the FBI about his contacts with Russian agents.

His cooperation and the information he provided had assisted the U.S. government in convicting a Russian intelligence officer of espionage-related charges in federal court.

Claims that the DOJ and FBI were not politically biased in seeking a FISA surveillance order against Carter Page are no longer believable.

It’s now clear that the modus operandi for trying to destroy the Trump presidency is to indict and squeeze those associated with him to prod them into revealing criminal behavior on the part of the president.

Neither Michael Flynn nor George Papadopoulos was charged with collusion with the Russians … they were charged with making false statements to the FBI.

And Paul Manafort was indicted for crimes completely unrelated to Russia.

All 3 are now cooperating with Robert Mueller’s investigation into possible collusion or obstruction of justice.

The presiding judge in Paul Manafort’s case stated the obvious when he said everyone can “see that the true target of the Special Counsel’s investigation is President Trump…and that defendant’s prosecution is part of that larger plan. Specifically, the charges against defendant are intended to induce defendant to cooperate with the Special Counsel by providing evidence against the president or other members of the campaign.”

To learn more information about the Deep State and its goals and tactics, get my new book, The Deep State: 15 Dangers You Should Know.

You can order it here: https://deepstatebook.com/

One Comment on “The Deep State Unhinged: 9 Ways the DOJ Has Misused Its Power During the Trump-Russia Collusion “Investigation””