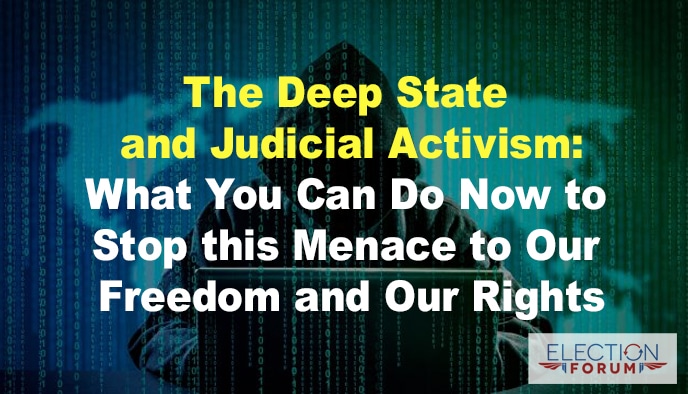 The Deep State infiltrates every branch of the U.S. government…

Its objective is to manipulate, grow, and maintain power through corrupt and unconstitutional ways.

And one of the most dangerous strongholds of the Deep State is in the judicial branch.

Here are 3 things you need to know about the dangers of judicial activism, and what you can do now to stop this menace to our freedom and our rights.

#1: Judicial Activists Rule Based on Their Opinion, Not the Law.

The responsibility of a judge is to interpret and apply the law based on the U.S. Constitution, and on state law.

The role of the judge is not to advance or promote an ideology or political agenda.

Unfortunately, there are judges in both the Supreme Court and state courts who aim to manipulate the law and public policy to advance their own agendas…judicial activists.

Judicial activists are dangerous to the country because they legislate from the bench. And they’ve had a terrible, negative impact on our constitution, our society, and our government.

Our freedoms have been threatened and our foundations rocked by these Deep State ideologues. Judicial activists have been appointed by recent political leaders—not just Obama, but even former President George Bush, and on the state level, it’s just as bad. For example, California governor Arnold Schwarzenegger filled the bench with mostly judicial activists.

What America needs now are strict constructionists: judges who interpret the law and apply the Constitution as based on its original context.

#2: Trump Was Starting to Drain the Judicial Swamp

One of the greatest things President Trump has done so far as President is to nominate Neil Gorsuch to the Supreme Court to replace Antonin Scalin.

Trump kept his promise to voters who elected him President because they wanted to see a strict constructionist on the Supreme Court…someone who would uphold their beliefs and their principles.

With Gorsuch, the court will take on a more balanced, constitutionalist bent, leaning toward judicial restraint.

Gorsuch is young—meaning he can serve for another 30-40 years. He’s well respected among conservative and liberal jurists. And he has a solid judicial record on the following issues:

Gorsuch’s seat was a crucial swing seat… if a judicial activist had been nominated, it could have meant destruction to the country, to you, and to your children.

Trump’s critical nomination of this judge was decisive in deciding the future of America.

And since then, President Trump has continued to keep his promise to appoint “strong and principled jurists.” He has also nominated well over a dozen other judges to different courts.

Trump is draining the swamp—and protecting our freedoms in the process.

But there’s still more to be done.

#3: The 2018 Primaries Will be a Turning Point. Here’s What You Can Do to Help Transform Society, Culture, and Politics.

In June, you’ll be voting for new judges on your state superior courts. These are judges who have the power to legislate their dangerous ideology from the bench—transforming our nation for the worse.

These judges have power. For example, in California, a superior court judge panel in Los Angeles ruled homeschooling as unconstitutional, saying it should be illegal.

This would restrict tens of thousands of parents from educating their children the way they choose—forcing them to put their children in a public education system that is driven by a dangerous ideology at odds with their religious beliefs or desires.

The judges elected in 2018 will have the power to make decisions about:

The judges who are elected in the primaries will have the authority to rob you of your freedom.

That’s why it’s critical that you educate yourself as a voter.

We vet and research thousands of judges for our Judge Voter Guide, which covers every county in the state of California. Eventually, we’ll create a Judge Voter Guide for the rest of the nation. ….so that no matter where you live, you can vote for judges who will uphold your values and principles.

Will you take a stand with us for freedom, family values, and transformation?

For $10, you could run one Facebook ad to help drain the swamp.

For just $20, you could expose one dangerous judicial candidate via targeted research.

For $100, you could fund a full Facebook ad campaign to help others like you learn about how we can influence culture and politics in America.

And for $1,000 you could put a conservative judicial candidate in the top two.

Take a stand with us today, and help drain the judicial swamp!