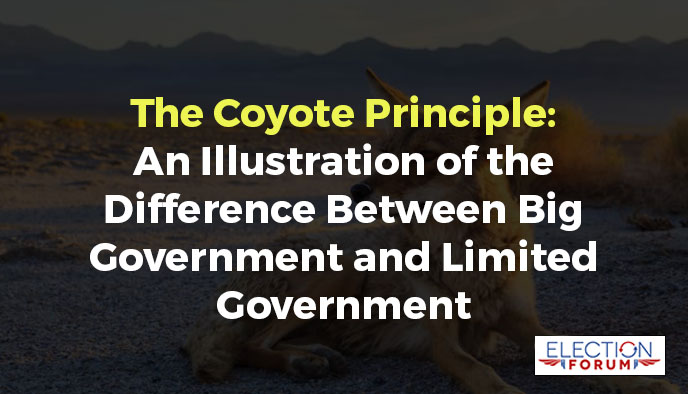 The following is not a true story … but it’s a great illustration of how our lives are impacted differently according to the type of government we empower to rule over us.

But it could just as well be a comparison between any socialist-leaning state versus any libertarian-leaning state. Ask yourself which category your state falls into.

“The Governor of California is jogging with his dog along a nature trail. A coyote jumps out and attacks the Governor’s dog, then bites the Governor.

“The Governor starts to intervene but reflects upon the movie “Bambi” and then realizes he should stop because the coyote is only doing what is natural.

“He calls animal control. Animal Control captures the coyote and bills the state $200 for testing it for diseases and $500 for relocating it.

“He calls a veterinarian. The vet collects the dead dog and bills the State $200 for testing it for diseases.

“The Governor goes to a hospital and spends $3,500 getting checked for diseases from the coyote and on getting his bite wound bandaged.

“The running trail gets shut down for 6 months while Fish & Game conducts a $100,000 survey to make sure the area is now free of dangerous animals.

“The Governor spends $50,000 in state funds implementing a “coyote awareness program” for residents of the area.

“The State Legislature spends $2 million to study how to better treat rabies and how to permanently eradicate the disease throughout the world.

“The Governor’s security agent is fired for not stopping the attack. The state spends $150,000 to hire and train a new agent with additional special training for the nature of coyotes.

“PETA protests the coyote’s relocation and files a $5 million lawsuit against the state.”

“The Governor of Texas is jogging with his dog along a nature trail. A coyote jumps out and attacks his dog.

“The Governor shoots the coyote with his state-issued pistol and keeps jogging.

“The Governor has spent $.50 on a .45ACP hollow point cartridge.

“The buzzards eat the dead coyote…”

“And that, my friends, is why California is broke and Texas is not.”

This is the official end of the story…

In reality, California currently has a budget surplus … but this is only because it has the highest state income tax rate in the nation – up to 13.3% — while Texas has no state income tax at all.

What do you think about this analogy? Email me at craig@electionforum.org

One Comment on “The Coyote Principle: An Illustration of the Difference Between Big Government and Limited Government”