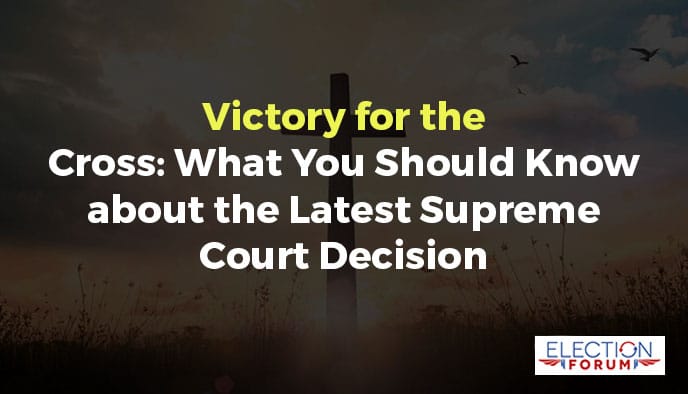 Christians in America were handed a victory in a recent U.S. Supreme Court ruling.

The U.S. Supreme Court recently ruled that a 40-foot high concrete World War I memorial cross does not violate the Establishment Clause of the First Amendment … and can therefore remain on public land.

Let me explain each of these…

1. If the American Humanist Association and other secular and atheist groups had their way, all references to Christianity would be removed from American history.

As Christians, we need to fight strongly against this trend.

2. The Establishment Clause of the First Amendment really has nothing to do with a group of private citizens getting together and erecting a cross or other religious symbol on public land.

Here’s what the religious clauses of the First Amendment say:

“Congress shall make no law respecting an establishment of religion, or prohibiting the free exercise thereof;”

3. The arguments given by Justice Samuel Alito in the Supreme Court’s majority opinion turn the cross of Christ into a secular symbol devoid of any religious significance.

He described the cross as “a prominent community landmark” and that removing it would have a divisive impact, “especially in the local community for which it has taken on particular meaning.”

He rejected the dissenting view that “The Latin cross is the foremost symbol of the Christian faith, embodying the ‘central theological claim of Christianity: that the son of God died on the cross, that he rose from the dead, and that his death and resurrection offer the possibility of eternal life.’”

For the majority on the Court, the cross has been reduced to nothing more than a secular symbol to honor the dead.

One Comment on “Victory for the Cross: What You Should Know about the Latest Supreme Court Decision”