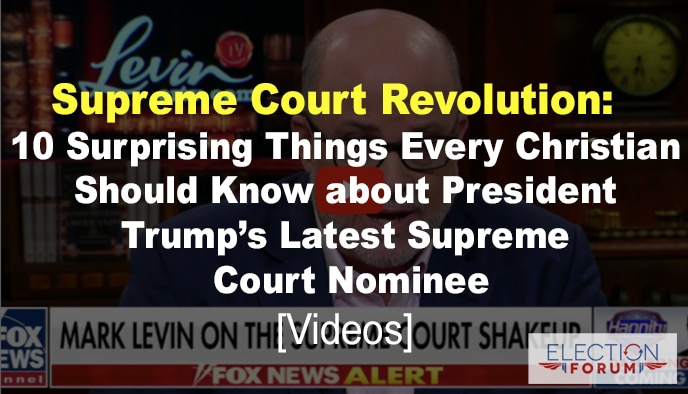 It was a very calculated, strategic move on the part of the president…

Here are 10 surprising and important things you should know about Judge Kavanaugh … why he was chosen … and why the progressives have declared war:

One of candidate Trump’s campaign promises was that if he were elected, he would appoint judges who:

Donald Trump was elected in large part because of this campaign promise … because people have grown tired of … and disgusted with … unelected federal judges legislating from the bench … and not following the Constitution.

Judge Kavanaugh is a respected, highly-experienced federal appeals court judge on the District of Columbia Circuit Court in Washington, D.C.…

His academic credentials and professional experience are impressive:

In his nomination acceptance speech, Kavanaugh said, “A judge must be independent and must interpret the law, not make the law.”

Throughout his professional career, Judge Kavanaugh has demonstrated a steadfast and fearless commitment to defend religious liberty:

They want to be able to control the majority of seats on the Supreme Court so they can enshrine their political ideology into the Constitution through the legislative fiat of Supreme Court decisions.

Because they aren’t able to accomplish their political agenda legislatively…

During the upcoming Senate confirmation hearings and media reports, listen for talk from the progressives about upholding the Constitution … about the role of the Supreme Court in Article 3 … or about the words or statements in specific sections of the Constitution.

You won’t hear such talk coming from the progressives.

Instead, you’ll hear them talking about whether Judge Kavanaugh supports their political ideology:

Conservative talk-show host Mark Levin says the progressives want to turn the Supreme Court into their own “Politburo” – an all-powerful, centralized political operation that they can control.

Opponents of President Trump and his nominee are already running ads in the states of key senators … and planning procedural delays in an attempt to postpone the confirmation vote until after the November mid-term elections … when they hope to regain a majority in the Senate.

“Now is the time for hardball,” said one progressive activist.

As a Washington-based lawyer and judge throughout his career, Kavanaugh is well-known and well-respected by all the “establishment” politicians.

Thus, his chances of confirmation are much higher than they’d be for a lesser-known – or more of an outsider-type – nominee.

Also, Judge Kavanaugh has expressed belief that the now-lapsed independent counsel statute is a violation of the separation of powers.

And his rulings and opinions while serving on the D.C. Circuit Court indicate that he favors government deregulation.

It’s also possible President Trump is keeping the more conservative and evangelical Judge Amy Coney Barrett “in reserve” for when Justice Ginsburg needs to be replaced.

About 40 evangelical leaders co-signed a letter applauding President Trump’s nomination of Judge Kavanaugh … and urging the Senate to “work diligently to confirm his appointment without obstruction.”

Among the signers were:

Jay Sekulow – Chief Counsel of the American Center for Law and Justice and a member of President Trump’s legal team – said, “Judge Kavanaugh is a brilliant jurist who embraces the philosophy of our Founders – an unwavering commitment to the rule of law and the Constitution.”

Focus on the Family president Jim Daly said, “Judge Kavanaugh has the reputation of being fair-minded and able to work with his fellow judges who might have a different point of view. His temperament is well-suited for the demands of our nation’s highest court.”

Because President Trump chose Judge Kavanaugh from a list he compiled with the help of the Heritage Foundation and The Federalist Society.

According to the senator, those groups have ties to corporations … and he therefore rejects anything having their input.

Other progressives vowed in advance to work against confirming the nominee in retaliation for Senate Majority Leader Mitch McConnell’s refusal to hold a vote on President Obama’s nomination in 2016 to replace Justice Antonin Scalia.

Shortly after the announcement that Judge Brett Kavanaugh was the Supreme Court nominee, The Women’s March issued a statement saying in part:

In their rush to condemn the nominee regardless of who it might be, they forgot to replace the placeholder with the nominee’s name!

It all started when Democrats on the Senate Judiciary Committee filibustered and successfully blocked 10 of President George W. Bush’s federal circuit-court nominees – all of whom were supremely qualified … and had majority support in the full Senate.

When Republicans “returned the favor” and filibustered some of President Barack Obama’s nominees, the Democrat-controlled Senate eliminated the filibuster for all but Supreme Court nominees…

Then they used the “nuclear option” – the option of confirming a nomination with a simple majority vote instead of the 60-vote standard – to pack the federal circuit courts with President Obama’s liberal activist judges.

The 3rd mistake the Democrats made was to filibuster President Trump’s nomination of Neil Gorsuch to the Supreme Court – while the Republicans controlled the Senate.

You can guess what happened next…

The Republican-controlled Senate eliminated the filibuster for Supreme Court nominees … and used the “nuclear option” to confirm Justice Gorsuch with a simple majority vote.

Had the Democrats not tried to block Neil Gorsuch with a filibuster, they’d still have it today to use against Brett Kavanaugh…

Rather than talking about their disagreements with Kavanaugh’s judicial philosophy … or his view of interpreting and applying the Constitution … the media are using their standard tactic of impugning his character and distorting his record.

Don’t fall for media misinformation … it’s biased and not truthful.

This is a man of integrity … a man who will interpret the law, not create it…

In other words, he will act the way a judge should act…

The media and progressive politicians are trying to convince you that no Supreme Court justice should be confirmed in an election year.

But there’s a difference.

The Republicans in 2016 were merely following the precedent established by the Democrats in 2007.

Have you ever thought about what the Supreme Court produces?

The infamous Dred Scott decision in 1857 declared that blacks were not and could never be U.S. citizens.

The Plessy v. Ferguson decision in 1896 ruled that racial segregation laws for public facilities were constitutional as long as the segregated facilities were equal in quality.

These two Supreme Court decisions were later overturned … but the ideas they conveyed are still having consequences today – more than 100 years later.

AS President John F. Kennedy observed, “A man may die, nations may rise and fall, but an idea lives on.”

Eventually the Supreme Court will be asked by the LGBTQ community to define sexual orientation and gender identity (SOGI) as protected classes under federal anti-discrimination laws.

Imagine the consequences if such a determination is made:

We should add, “…nor from one wearing the robe of a Supreme Court justice.”

The ultimate responsibility for the morality of a culture rests with its citizens.

If confirmed to the Supreme Court, Judge Kavanaugh will help defend religious liberty, biblical morality and the sanctity of life…

As Christians, we are the “light of the world.” We are called by God to influence our society for good (Matthew 5:14).

Throughout history, Christians have taken the lead in opposing slavery, abortion, sex trafficking, racism, poverty, disease, hunger and a host of other threats to the common good.

If we love our Father in heaven, we must love our neighbor every day – whether it’s convenient or inconvenient – as the Samaritan outcast demonstrated with the haughty Jew in Luke 10:25-37.

As tempting as it may be to retreat from our perilous society into spiritual “safe zones,” we must not abandon either the Great Commission (Matthew 28:18-20) … or the communities we are called to serve (Jeremiah 29:7).

Watch this video of Mark Levin talking with Sean Hannity about the progressive agenda (7 ½ minutes):

Also watch this video of Gregg Jarrett and Sebastian Gorka discussing the hysteria of the left over the nomination of Judge Kavanaugh (about 5 minutes):