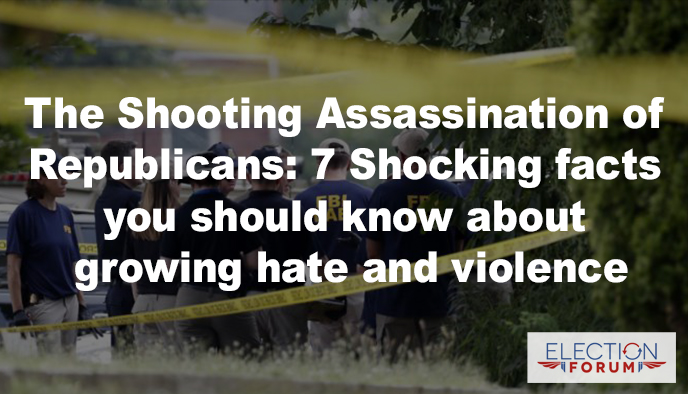 The Washington D.C. shooting by a Bernie Sanders liberal Democrat has created a massive warning for those shouting “resist.”

This is not about Democrats or Republicans.

It’s about politics transitioning from Democrat/liberal vs Republican/conservative view on issues and policy to outright political violence by liberals and socialists.

As I mentioned in my 7 Shocking Facts: The Liberal Press Bias on Steroids article, 89% of ABC, CBS, NBC and CNN have distorted reporting that’s anti-Trump. No balance. The biased news is creating attitudes ripe for violence. CNN, the New York Times and others are even defending the N.Y. Central Park play (government subsidized) displaying Trump being stabbed to death.

The night before the shooting, I watched KCAL TV in Los Angeles. 94% of the show, anti-Trump. 88% unbalanced liberal reporting and commentary, not news.

Dave Bryan, the lead political reporter, has long lost all objectivity and created a constant biased, slanted reporting that could only leave viewers angry, upset and disgusted –but it was all twisted reporting and not fact or balanced. It was a forum of hate speech.

And the night of the assassination attempt: it wasn’t even the lead story. The lead story as 3 minutes of anti-Trump hysteria based on unconfirmed “leaks” from the Justice Department.

And it’s based on the narrative of 1) Russian Collusion and 2) obstruction of Justice.

No facts. No evidence. There have been investigations, ex FBI head James Comey testimony, and Attorney General Jeff Sessions testimony– not a shred of evidence.

Total lies. Watch Tucker Carlson trying to find one piece of evidence from a Democrat Spokesman. About 7 minutes. Watch here:

Debate the issues. Debate policy. But stop the innuendos, myths and speculations and the climate of hate and anger.

Get legislation passed for the good of the country.

The liberal Governor of Virginia played gun politics at the press conference calling for gun control, as has other politicians and the biased media.

Incidentally, this violence took place in a “gun free” zone.  This was not “gun violence.” It was political violence.

Gun control would not stop this attack. In fact, the type of gun used was already illegal in the assassin’s home state.

The shooter did threaten the President on Facebook. But where was the FBI and law enforcement?

Good guys with guns saved innocent lives from a hater with a gun. Thank God.

The Democrats and liberals are fueling hate and anger.

They have crossed the line.

They will not speak out against the inflammatory language from their party.

What’s more harmful: Putting millions already on the margins more at-risk via draconian policies, or shooting a racist lawmaker in the hip?

It’s an all out, organized assault fueled by the liberal media and liberal politicians. Will they call for thoughtful disagreement? Will they condemn the rhetoric and anger? Or continue their climate of hate?

What if it was Republicans and conservatives rioting, shooting, killing and demonizing liberals? What would they say and do?

Here’s another video on the “Out-of-Control Violence From the Left.” Watch here:

My prayer is Democrats and Republicans will come together to work on Americas problems and stop the hate.

I was encouraged by the Democrats who prayed after the shooting.

I hope they will step up and tell their leadership to stop the madness and become civil.

Watch Senator Tim Scott talk about prayer and our Christian heritage in light of the attack. Watch here:

Let’s pray for Congressman Steve Scalise and the others shot for a quick and full recovery…and their wives and kids.

And let’s pray the fear, terror and interference with our peaceful form of government not prevail or ever slow or interrupt Congress so they would more swiftly or necessary legislative changes.

10 Comments on “The Shooting Assassination of Republicans: 7 Shocking facts you should know about growing hate and violence”