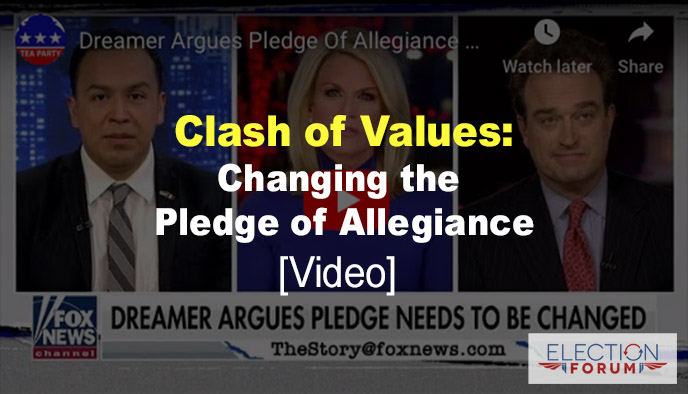 Do you think the Pledge of Allegiance is “rooted in nativism and white supremacy?”

Would you like to see the wording of the pledge changed?

Cesar Vargas, who runs the Dream Action Coalition – and others wanting bigger government and socialism – are working to change the pledge to this:

“I pledge allegiance and love to our indigenous and immigrant heritage, rooted in the United States of America, to our civil rights for which we strive, one voice, one nation, for equality and justice for all.”

America stands for the principles we currently uphold when we recite the pledge:

The problem is, too many have gone through public, government-run schools and colleges … and don’t understand the values of liberty and the failures of statism and socialism.

And too many who come to America reflect the values of their failed countries.  The big exceptions are those fleeing the terrors of Socialism and Communism in their home countries.

In California, the president of the Santa Barbara City College Board of Trustees recently announced he would no longer allow the Board to recite the Pledge of Alliegance at the beginning of their meetings.

“I decided to discontinue use of the Pledge of Alliegiance for reasons related to its history and symbolism. I have discovered that the Pledge… has a history steeped in expressions of nativism and white nationalism,” he said in email correspondence with a professor at the college.

Not only that, the college president believes the current pledge is “racist,” and that it “violates the separation of church and state principle upon which America was founded.”

What do you think? Is the new pledge what should be used instead of the current one, which some find offensive?

Note: After announcing the discontinuation of reciting the pledge, the Santa Barbara City College Board of Trustees reversed his decision, reinstating the pledge after a strong backlash and heated debate.

3 Comments on “Clash of Values: Changing the Pledge of Allegiance [Video]”