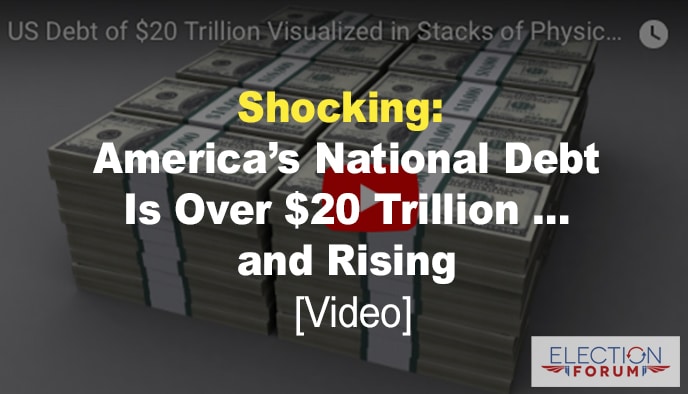 The national debt shot over $20 trillion.

This is shocking, considering what it can mean to you and your family. And what the Word of God says about debt.

It means we are paying China, the banks and Wall Street massive interest payments.

This money should be used for paying for our military and security, justice and infrastructure.

To get Hurricane Harvey relief spending quickly, President Trump, Democrats and Republicans got the spending they wanted by suspending the debt limit.

This is a bad deal for taxpayers and our children. This allows the debt ceiling to rise even higher.

Our debt now exceeds the value of everything that America produces in a year!

To get what we WANT now with a promise to pay more money for it LATER just doesn’t work.

This kind of debt will lead to economic recession and depression. And to inflation and maybe hyperinflation.

If we could round up all the U.S. currency in existence – every dollar bill, quarter, penny, everything – we would still need another $18 trillion.

All the gold that has ever been mined couldn’t cover half our debt.

Like Greece, we will be forced to make sudden cuts because we cannot borrow more to finance our spending addiction.

Whoever said money doesn’t grow on trees underestimates our politicians.

You can’t just print more money. It could lead to hyperinflation.

You can’t just let the spending ceiling rise into the stratosphere either.

The Bible warns against debt. It creates slaves.

“Owe no one anything except to love one another, for he who loves another has fulfilled the law.”

It’s clear in Psalm 37:21 God does not approve of not paying debts in a timely fashion.

“The wicked borrows and does not repay, but the righteous shows mercy and gives.”

One proposed idea is to reduce future spending increases to the rate of inflation. Nope, Congress won’t even do that.

I wish Congress could see the big picture. This year we will pay more than $250 billion just on interest payments alone! That’s money wasted.

Hey, political leaders, are you listening?

Here is an eye-popping 2-minute video that visualizes our $20 trillion debt in stacks of cash.