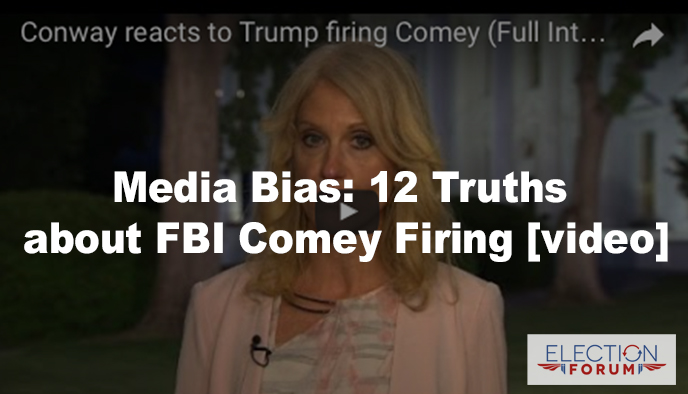 The media is badly distorting the reality of Trump’s firing of James Comey, the FBI Director.

Here are 12 realities and truths you should know:

1) Republicans and Democrats agreed on one thing: Comey should be fired.
He was. Most Democrats now act shocked, even after calling for his resignation.

2) The FBI lost its credibility for fairness and justice. Under Comey, the FBI reputation of being anti-Hillary, anti-Trump, lack of proper justice, lack of proper, timely investigations – double-standards and political favoritism has polluted the agency.

3) The public – Independents, Libertarians, Democrats, Republicans – have also lost confidence in the objectivity and professionalism of the FBI because of Comey.

4) The FBI agents lost trust in Comey as its head. The deep and growing division was public…and trust of many of the agents had to be restored. That could only be done by his removal.

5) The local and national news, online reports and Facebook is filled with false reports and distortions. The media hype is anti-Trump, not anti-firing.
The Democrat leadership and the biased media have all shifted from replacing Comey to expanding the political narrative that it’s a cover up of Russian collusion with Trump. No proof. No evidence.
Just innuendo. Just hype, no fact.
Just look at this CNN interview with Anderson Cooper and Kellyanne Conway – watch how she cuts through Cooper’s propaganda lines. Click here.

6) Comey Firing was after his boss was confirmed by the Senate and had a chance to review the issue. Deputy Attorney General Rod Rosenstein who recommended firing Comey was appointed by Clinton, Bush and Obama. He was approved by all but one Democrat several weeks ago. If anything, he has a pro Democrat history…but he is a professional and seems to behave in objective fairness. The timing of the firing is based on his review of Comey’s performance. His report is titled “Restoring Public Confidence in the FBI.”

7) The FBI Director had elevated himself and should not have. Comey elevated himself into a public position. He was unaccountably arrogant. It was not objective, fair enforcement of the law. People should not fear the FBI director. It should not be a FBI dictatorship by an unelected official.

8) No FBI Director ignored the law and fairness like Comey. The FBI is the most powerful and respected investigation agency in the world. But it’s become more powerful, and not respected. And that is bad for a free society.

9) The Russian Investigation Continues.
Comey firing in no way interferes with the FBI investigation or Congress.

10) You won’t hear it in the media much, but even liberal Democrats can’t fault this decision to fire Comey.
Alan Dershowitz, Liberal Democrat and top legal/constitutional professor on CNN said Comey lacked the credibility to be the FBI Director and should have resigned because neither Democrats nor Republicans have confidence in him.

11) Now a really good FBI Director is needed…fast. The acting director of the FBI is now Andrew McCabe. I have great worries about his objectivity. In fact, his wife is a big Democrat donor and activist. She is tight with Clinton and the Democrat establishment and was a Democrat candidate recently in Virginia.

12) Time to pray. Please pray for President Trump, the next director and our country.