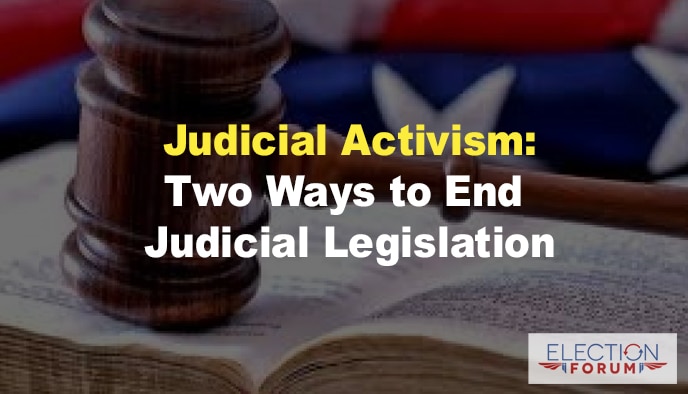 Progressive judges are using the courts to legislate from the bench.

That’s not right … it’s a violation of the constitutional separation of powers.

Progressive ideologs have been appointed or elected.

For example, during his 8 years in office, Barrack Obama appointed more than 300 federal judges, giving them control over America’s federal court system.

He appointed liberal judicial activist judges who legislate law from the bench rather than limiting their authority and role to that which is clearly stated in the constitution.

And because these judges are appointed for life, they are firmly entrenched in their activist roles until they either die, or retire of their own volition.

This places religious freedom, freedom of speech, economic freedom and other individual freedoms guaranteed in the Bill of Rights in grave danger.

Judges are stopping good and proper legislation and presidential executive decisions based solely on politics, not law.

This must stop. But how?

There are 2 things which must happen:

But there is still a backlog of 120 judicial vacancies … and many of Trump’s nominations are being held up by Democrats who are obstructing his agenda.

The 9th U.S. Circuit Court – the most liberal and the most overturned appellate court in the country – has 4 vacancies … with 2 more coming this year.

Trump’s nominee for the Oregon seat – Ryan Bounds – has been awaiting confirmation for 3 months while Oregon’s two senators are trying to use procedural grounds to block the appointment.

Across America, we will have the opportunity this year to elect judges for:

We are researching the judicial candidates now…

In fact, we are the only group to evaluate judges and rate them on policy and ethics … and separate the judicial activists from the strict constructionists.

To do this, we need your financial help…

Could you donate $10 to help us research and post our findings?

Only with your help can this be done.

You can do it online by just clicking below:

Or send your check to:

We have a duty and a responsibility to educate ourselves and to discern which candidates will follow the constitution in their rulings, and will defend religious freedom.