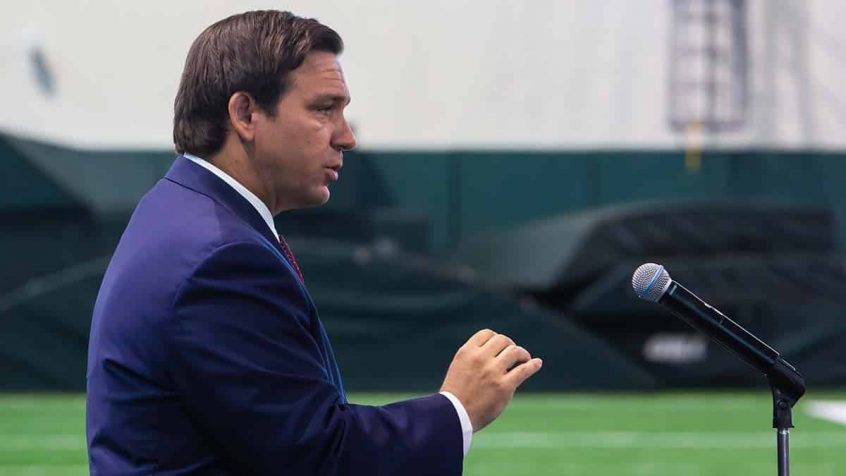 A politician admitting he not only made a mistake – but a terrible blunder.

#1. The lockdown was a “destructive mistake” and didn’t work.

Governor DeSantis said that the lockdowns were a “huge mistake,” including in his own state of Florida. “We wanted to mitigate the damage. Now, in hindsight, the 15 days to slow the spread and the 30 – it didn’t work,” DeSantis said. “We shouldn’t have gone down that road.”

South Dakota never went into lockdown. Overseas, Sweden and a few other countries didn’t lock down. The result: no greater COVID deaths, but also no economic, social, and psychological damage.

Florida’s lockdown order was dramatically less strict than other states. Churches were open for inside worship services. Recreational activities like walking, biking, playing golf, and beachgoing were allowed.

“Essential business” was broadly defined and people were able to work.

“Our economy kept going,” DeSantis said. “It was much different than what you saw in some of those lockdown states.”

The governor now regrets issuing the order at all.

He is convinced that states that have kept their people in lockdowns are perpetuating a destructive blunder.

After the initial 30-day lockdown in Florida lapsed, DeSantis commenced a phased reopening.

And when cases began to rise as part of the winter surge, he didn’t reimpose any restrictions.

The media and the media’s bureaucratic establishment predicted massive deaths that never happened. The deaths and hospitalizations went down, while in the lockdown states, they went up.

#2. Science and data: While doctors differ on policies, every governor said they followed the “science and data,” but their outcomes proved the lockdowns not only not necessary, but very harmful.

The Florida Governor’s “free state” position on lockdowns was similar to other “free” states like Texas, Tennessee and Arkansas.

They track with the Great Barrington Declaration (see “The Biggest Mistake in America’s History? Lockdown States vs. Free States Show Difference” https://www.electionforum.org/government/the-biggest-mistake-in-americas-history-lockdown-states-vs-free-states-show-difference-video-and-list-of-free-states/?highlight=Barrington%20declaraion), which criticized lockdowns as destructive and futile mitigation measures. The declaration, signed by 13,985 medical and public health scientists, calls on public officials to adopt the focused protection approach – the exact strategy employed by DeSantis.

If any state should have been hit hard by COVID-19, it was Florida. Why?

Florida has the sixth oldest population in the United States by median age, but ranked only 27th among all states in deaths per capita from COVID-19.

#3. Florida’s economy is booming. In lockdown states it’s a disaster.

Florida is performing better than strict lockdown states in terms of COVID-19 virus mortalities despite the older demographics.

Florida’s economy is booming compared to the failed and disastrous lockdown economies in California, New York and other lockdown states.

Florida’s unemployment rate is 4.7 percent and plummeted compared to 6.2 percent nationally. Lockdown states like New York, New Jersey, Pennsylvania, and California had some of the highest rates in the country – 8.9 percent, 7.8 percent, 7.3, percent, and 8.5 percent respectively.

#4. The difference is more than economic – it’s a human tragedy.

The human suffering from the lockdown includes an explosion in suicide rates, mental health issues, postponed medical treatments, and skyrocketing opioid deaths. This has been especially harmful to kids.

But the emotional trauma and mental and emotional health issues in free state Florida vs. lockdown state California is night and day.

#5. DeSantis is being censored by Big Tech because they hate his policies.

The governor has been criticized by the media, maybe more than any other free market-elected official in the U.S.

Big Tech has censored him as well.

YouTube scrubbed videos of a roundtable discussion between DeSantis and prominent scientists from Harvard, Oxford, and Stanford who agreed that lockdowns are ineffective.

“Google and YouTube have not been, throughout this pandemic, repositories of truth and scientific inquiry, but instead have acted as enforcers of a narrative, a Big Tech council of censors in service of the ruling elite,” DeSantis said.

“Also, when they took down the video… they were really continuing what they’ve been doing for the past year. [They] stifle debate, short-circuit scientific inquiry, make sure that the narrative is not questioned. And I think that we’ve seen already that that has had catastrophic consequences for our society.”

And if unfairly attacked by the media, he won’t let them get away with it.

If your governor isn’t as courageous – and honest – it’s time for a change.

Click here to watch the video on Governor DeSantis.

We have targeted 7 U.S. Senate races and 25 key Congressional and Governor races for 2022 where we can make a difference in elevating a person of integrity and vetted, proven ideas and leadership. And yes, courage to stand firm.

Could you help donate $10.00 or more to our Turn America Around Fund?

We must help these candidates now while there is time for them to win their primaries.