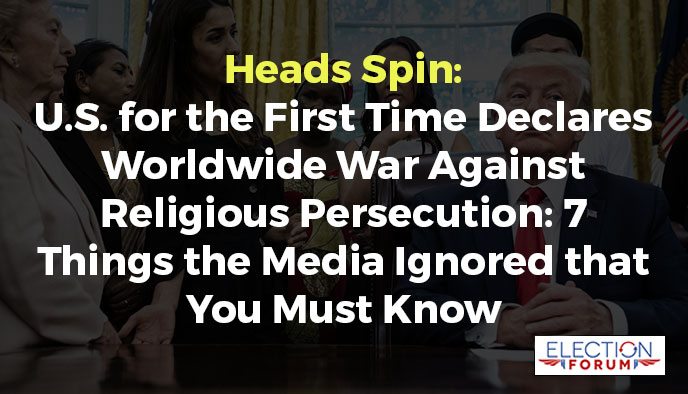 For the first time in American history, the President and Vice President Pence made a U.S. stand for religious freedom … and against religious persecution.

Here are 7 things the press won’t tell you about this historic event:

1. For the first time, America took a bold stand for religious freedom worldwide before world leaders at the U.N. General Assembly.

The action was led by President Trump – with Vice President Pence – and amazingly joined by U.N. Secretary General Antoni Gutierrez.

Here is what President Trump said at the “Global Call to Protect Religious Freedom” at the U.N. General Assembly:

“The United States is founded on the principle that our rights do not come from government; they come from God. This immortal truth is proclaimed in our Declaration of Independence and enshrined in the First Amendment to our Constitution’s Bill of rights. Our founders understood that no right is more fundamental to a peaceful, prosperous and virtuous society than the right to follow one’s religious convictions.”

“Regrettably,” Trump said, “the religious freedom enjoyed by American citizens is rare in the world. Approximately 80 percent of the world’s population lives in countries where religious liberty is threatened, restricted or even banned.”

“… Today with one clear voice, the United States of America calls upon the nations of the world to end religious persecution, to stop the crimes against people of faith, release prisoners of conscience, repeal laws restricting freedom of religion and belief, protect the vulnerable, the defenseless and the oppressed.”

2. Approximately 80% of the world lives with religious persecution – mostly Christians – with an estimated 11 Christians killed every day.

“An estimated 11 Christians are killed every day for following the teachings of Christ. Who would even think that’s possible in this day and age?”

“America stands with believers in every country who ask only for the freedom to live according to the faith that is within their own hearts,” he said. “As president, protecting religious freedom is one of my highest priorities … and always has been.”

3. The U.S. is adding $25 million in funding to protect religious sites and relics.

“We ask the governments of the world to honor the eternal right of every person to follow their conscience, live by their faith and give glory to God,” Trump said. “The United States has a vital role in this critical mission.”

4. The President called out oppressive governments.

Some nations – such as socialist China and North Korea … and Muslim countries like Afghanistan, Saudi Arabia and Pakistan – are openly persecuting religious minorities.

In other countries, the government passively attacks people of faith.

5. President Trump is organizing businesses to help in the fight for religious freedom.

He announced that the U.S. will form a coalition of U.S. private businesses interested in promoting the protection of religious freedom – the first initiative of its kind.

President Trump emphasized: “This initiative will encourage the private sector to protect people of all faiths in the workplace.”

“Too often, people in positions of power preach diversity, while silencing, shunning or censoring the faithful,” Trump said. “True tolerance means respecting the right of all people to express their deeply held religious beliefs.”

6. The media mocked … the politicians attacked … people of faith should resolve.

This CNN headline was par for the course: “Trump will Hold Session on Religious Persecution Instead of Attending UN Climate Summit.”

The “Global Call to Protect Religious Freedom” was about real experiences of people of faith around the world … real persecution … real struggles.

We all need to answer to this call.

7. Pray for the persecuted church.

What do you think? Email me at Craig@electionforum.org

2 Comments on “Heads Spin: U.S. for the First Time Declares Worldwide War Against Religious Persecution: 7 Things the Media Ignored that You Must Know”