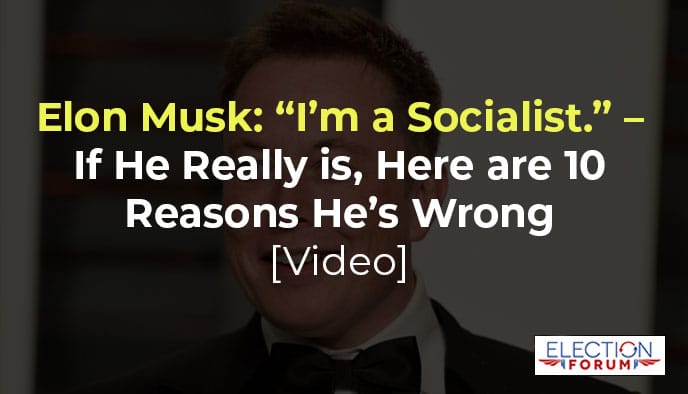 By the way, I am actually a socialist. Just not the kind that shifts resources from most productive to least productive, pretending to do good, while actually causing harm. True socialism seeks greatest good for all.

True socialism is a deeply flawed economic system. Here are 10 reasons why it doesn’t work over the long haul:

In a purely socialistic country, the government owns the means of production – the companies that manufacture products – and the distribution of all goods and services. Privately-owned businesses don’t exist. Bureaucratic central planning replaces the free market.

The U.S. economy is partially a free-market economy and partially a socialistic, government-controlled economy. Examples of socialism are:

Other examples will be cited in later paragraphs.

To summarize … When prices and wages are controlled by the government, market forces are prevented from allocating goods and services properly … and you end up with shortages and poverty – just like we see in Venezuela.

The U.S. progressive income tax is one of the largest – if not THE largest – wealth transfer system in the world:

Very few Americans are aware that there are over 80 federally-funded – that means taxpayer-funded – programs that provide cash, food, housing assistance, medical care, social services, training and targeted education aid to Americans with low or no income.

When Barack Obama was running for president in 2008, he had a widely-publicized campaign-stop conversation with a small business owner who came to be known as “Joe the Plumber.” When Joe complained that under Obama’s proposed tax plan, he would be punished with a higher tax rate if he succeeded and built up his business, Obama said everyone benefits when you “spread the wealth around.”

This is the essence of socialism: spreading the wealth around – with the government mandating how it should be done.

When the government mandates how people spend their income, it stifles – and then kills – their ability to make voluntary free-market economic decisions. Consider two examples:

Example One. The socialistic progressive income tax system – which funds socialism’s wealth-transfer programs – is mandatory, not voluntary. Because of this, it discourages hard-working Americans from making voluntary donations to charitable organizations that feed the poor and provide health care and other needed social services. They may want to give to a social program run by their church … or to another non-profit organization that is helping sick or disabled or homeless people. But they may have nothing left over after paying their taxes and their own living expenses. And if they do, they will often rationalize: “I’m paying taxes. Let the government take care of these social problems in my community.”

Example Two. If I want to start a new business, there are a myriad of regulations I have to follow. The government sets fees for licenses, permits, business name registration, and so forth. It tells me how much I have to pay my employees (via minimum wage laws), what benefits I have to provide in the health care plan I chose, etc., etc., etc. My free-market economic decision-making options are going to be severely limited in a socialistic economy.

Neither of these goals is compatible with solving problems.

You see, if government actually solved problems, it would put itself out of business. Federal departments created to solve housing problems, health problems, economic problems, energy shortages, etc., would be shut down because they would no longer be needed. Government employees would be furloughed (laid off) permanently.

But that never happens…

Instead, problems assigned to government agencies increase. More government employees are hired. Bureaucracies expand. Rules and regulations, along with their forms and paperwork, snowball.

A federal, Washington, D.C.-based top-down approach to solving social problems can never match the efficiency and effectiveness of an entrepreneurial, free-market approach.

Plus, there is no incentive for government bureaucrats to fix or solve problems. All they care about is collecting their fat paychecks … and their taxpayer-funded health care benefits.

As mentioned previously, in a purely socialistic government, private business doesn’t exist. There are no entrepreneurs like Elon Musk or Steve Jobs to develop new technologies and engineer and manufacture new products.

In a partial socialistic, partial free-market economy, entrepreneurship and innovation are stifled because of heavy business regulation, high taxation, and other obstacles created by government overreach that discourages the risk-taking that’s required to develop new technologies.

In 2015 after Bernie Sanders announced he was running for president, he did an interview with CNBC in which he said, “You don’t necessarily need a choice of 23 underarm spray deodorants or of 18 different pairs of sneakers when children are hungry in this country.”

What he doesn’t seem to understand is that more product choices mean more wealth.

Because multiple choices of products support more jobs than a single choice of a product does. Without those 23 choices of underarm deodorants and 18 choices of sneakers, even more children would be hungry.

The more the government controls business and the economy, the less freedom people have…

Just think about the price of gasoline as one example. When the government – federal, state or local – raises the tax on gasoline by an exorbitant amount, it reduces the freedom of families to take that vacation they were planning … because they now can’t afford the higher cost of filling the gas tank in their car.

Or when government attacks and shuts down a Christian business for violating an anti-discrimination ordinance, it takes away the freedom of the business owner to operate his business consistent with his Christian beliefs … and it takes away your freedom to purchase products from that business – since it no longer exists.

An economy never grows rapidly under socialism because there is no financial or economic incentive for workers to succeed – to work overtime … to do more than is required … to increase their efficiency and productivity.

Socialism strives to “equal the playing field” – to make everyone have not only equal opportunity, but to have equal outcome.

This is not how society works…

It goes against human nature … as we will see below.

When government takes over an industry and sets prices for a commodity, shortages result. This creates economic upheaval … and personal misery.

What’s happening in Venezuela with utility services – water, gas and electricity – is a good example.

Winston Churchill called socialism “the philosophy of failure,” saying that “its inherent virtue is the equal sharing of misery.”

You can be sure that the government elites in Venezuela are not suffering from a lack of water or electricity!

Regarding this point … consider that people will inherently work harder to support themselves and their families than they will to generate income for the government.

This aspect of human nature was recognized 400 hundred years ago by the Pilgrims who came to America to escape religious persecution by the English government. It needs to be recognized again today…

10.Socialism has failed everywhere it has been implemented: Cuba, North Korea and Venezuela are just the latest examples.

And yet. college campuses teach it … and millennials increasingly favor it over capitalism.

Politicians are embracing it.

The media proclaims it.

And yes, many Silicon Valley and other business leaders like Elon Musk embrace it as well. Or does he?

It’s difficult to know what to make of his tweet.

I say this for 4 reasons:

So … is Musk attempting to define a new kind of “socialism” that is really free-market capitalism in disguise? Or is he perhaps just tossing around buzzwords in an attempt to curry favor with the socialist-leaning power brokers in Washington, D.C….

Margaret Thatcher – Prime Minister of the United Kingdom from 1979 to 1990 – said, “The problem with socialism is that you eventually run out of other people’s money.”

In Chapter 15 of my book, The Deep State: 15 Surprising Dangers You Should Know, I talk about the above 10 reasons why socialism always fails … and leaves economic and personal destruction in its path.

To order an autographed copy at a 20% discount, click here.  There are links on this site to order from Amazon in either hardback or Kindle version.