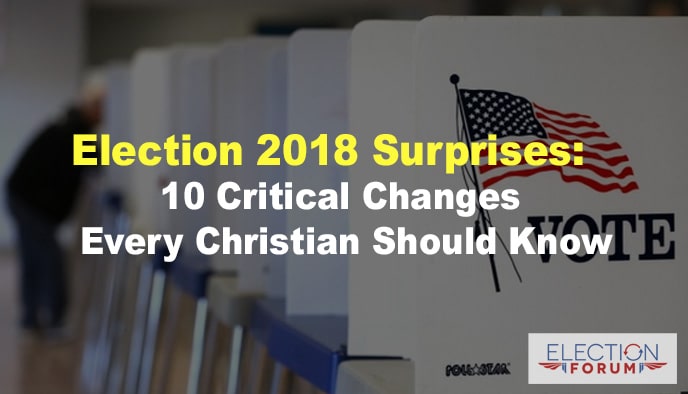 And your life just changed because of the 2018 midterm election.

This may turn out to be the most consequential midterm election of your lifetime.

Let me tell you about:

What just happened in this election was a historic game changer.

Because Republicans gained seats in the U.S. Senate despite historical precedent.

What does this mean to you?

A lot … for example:

Judges Neil Gorsuch and Brett Kavanaugh squeaked by. So did over 80 awesome federal court nominees.

The nomination and confirmation of additional conservative judges will be game-changing for the next 30 to 40 years.

The judicial activism that has been legislating progressive ideology from the bench – instead of upholding the Constitution – will be stopped.

This will protect religious liberty … promote free enterprise … and bring about greater justice.

Now President will be able to nominate great cabinet-level appointees – even Christians.

The Senate has been blocking appointees even because of their faith. That will now change.

Because of the new Republican majority, the Senate won’t allow the impeachment of President Trump, Justice Kavanaugh or Justice Gorsuch, or any cabinet officials.

This is great news that despite what the House may do, America will be protected from the progressive radicals.

The Democrat-controlled House will try to harass and stop every department of the federal government from performing any action to preserve religious liberty or to promote pro-life values.

The House will wage war against Christians for the next 2 years through its power to appropriate – or not appropriate – funds in support of the Trump administration’s agenda and priorities.

Most people don’t know about the efforts of Vice President Mike Pence … Secretary of State Mike Pompeo … and Ambassador-at-Large for International Religious Freedom Sam Brownback to reduce the amount – and the severity – of religious oppression and persecution around the world.

There’s a strong probability that angry progressives in the House will attempt to unwind and reverse all that they’ve accomplished.

See Historic and Powerful: 7 Surprising Things You Should Know About My Invite from the State Department [Religious Freedom Video].

Please pray for Vice President Pence, Secretary of State Pompeo and Sam Brownback that they will fight back and not be deterred or distracted by:

Some of the progressive Democrats that won re-election or election are pro-Palestinian and anti-Israel.

For example, Alexandria Ocasio-Cortez, who received a lot of media coverage.

In addition, two Muslim women were elected. The media applauded diversity but they didn’t mention that these two new Congresswoman support the Palestinians, and oppose Trump’s support of Israel and move of the Embassy to Jerusalem.

Expect more attacks on Trump’s fight against the UN, and funding and support of anti-Israel policies.

It was really more of a ripple than a wave. Some very good candidates and incumbents lost because of the blue wave (see number 9).

The blue wave was supposed to be a wipeout in the Senate and the House for the Democrats. But historically, what happened is that this actually showed more support for Republicans for Trump than a total rejection of President Trump.

Here are the historical records:

Organize now or lose. The progressive left was organized and disciplined good candidates early. They created a historical army of volunteers who made phone calls and knocked on doors, with a high-tech organized effort to identify their voters, their opposition and the persuadables. They did a very good job and they accomplished a great deal.

I’d be glad to send a copy of Indivisible to every reader. This is a report that progressives created to follow to help us understand what they did.

The Republicans were in shambles. They did not have the organization, in most cases, to be able to win. They were also dramatically outspent, usually 5 to 6 to 1.

Fundraising will be essential. But more than money, conservatives need to have better organization.

There were a number of sad losses in the last election, such as Scott Walker in Wisconsin.

However, one of the most disturbing is yet to be counted is now playing out in California. Congressman Dana Rohrbacher, who has led the fight for the persecuted church with his “Save the Christians from Genocide” bill and recently defending, supporting and making known the plight of Christians in Communist China, is about 2000 votes behind in his election bid.

Pray that he will be elected.

We appreciate those who supported our effort with the Election Forum. We are waiting for final analytics, but we came close to 1 million people visiting our voter guide.

Voter guides are the most powerful way to win an election, because people often don’t vote or only vote for a couple of candidates unless they have a complete view of how to vote for their values and not against them.

Furthermore, we dramatically expanded our network of people who viewed our webinars and attended our election forums at different groups and churches.

For example, TV commercials were running, drawing people to the election forum, thanks to kind donations. Other donors supported an aggressive campaign on the radio to draw people to electionforum.org. and we did some marketing to be able to help support candidates with geo-fencing.

This amazing new technique helps us to identify people who went to events such as Franklin Graham or Greg Laurie events or went to church in the last 4 to 5 weeks, and identify those names in Facebook, Google, pre-roll and YouTube commercials. We’re then able to send those names text messages and videos that give them information about how to vote their values.

Thank you to those who donated to that effort.

To continue our efforts to build our base and transform our efforts for culture and politics, the time to start for 2020 is now. Could you please help by donating $10 or more to start the campaign to help elect great candidates…and help create info that will equip us to dramatically outdo what the progressive left did this year?

4 Comments on “Election 2018 Surprises: 10 Critical Changes Every Christian Should Know”