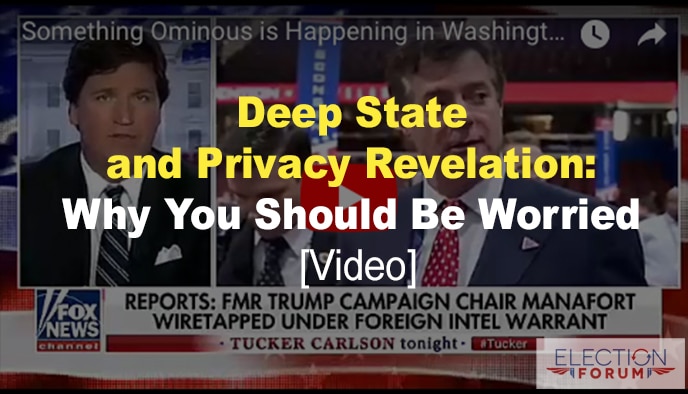 Yet there is a real crime going on: Illegal spying on Americans cannot be ignored, except by the progressive media.

The illegal spying by deep state operatives, holdovers from the Obama administration and career bureaucrats is damaging and out of control.

The deep state violated the Constitution by pursuing illegal wiretaps and spying on politicians and “enemies” of the administration.

This entire issue is being ignored by the media, despite the fact that under Obama’s watch, the Department of Justice even hacked the phone records of reporters!

What was called a lie … is now seen as true

CNN and the liberal media mocked Trump’s claim that his campaign was wiretapped. They laughed and called it a lie.

Now CNN says it’s true … but only as a byproduct of their non-stop reporting on Russia.

CNN is now reporting that former Trump campaign chairman Paul Manafort was wiretapped via a secret court order before the election as an outgrowth of his relationship with Viktor Yanukovych (former president of the Ukraine) and Manafort’s failure to register as a foreign agent.

The spying was authorized by a FISA court, which requires only the highest Obama administration approval. Could the spying into one person merely be mining for political dirt by the opposition?

But the media spin is on Manafort being in trouble, NOT on the illegality of spying and surveillance for political means.

It’s probable the politicized FBI used the discredited Trump dossier to get the warrant to tap Manafort.

We don’t know if Manafort is innocent or guilty.

But we do know the wiretapping and spying was:

You should not trust the CIA/NSA/FBI.

They have become political, not professional.

First, let me be clear. We need a strong and modern intelligence service in our very dangerous world.

And I support the patriotic, dedicated members of the intelligence community that works hard and makes sacrifices for the safety of American and protection of freedom.

But I am opposed to … even sickened by … the liberal politicization of the leadership and the bureaucracy of our intelligence community.

Obama appointees, some now gone, have a political ideology that dominates their worldview and activities.

CLICK HERE to watch this short, insightful video of Judge Napolitano explain the illegal proceedings in this video.

2 Comments on “Deep State and Privacy Revelation: Why You Should Be Worried [Video]”