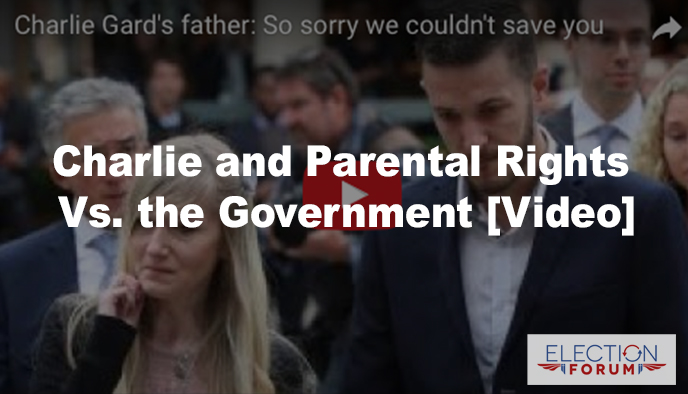 It’s parents vs. the state.

The case of 11-month-old Charlie Gard has been in the news because parental rights have been trampled by the government.

Charlie is diagnosed with mitochondrial DNA depletion syndrome (MDDS), a genetic disease so rare it’s believed to have diagnosed in only 16 children in the world.

Doctors say it is fruitless to keep treating the baby and he should be left to die.

The distraught parents, Chris and Connie, are prevented from seeking care by the government. They are being forced to let him die.

This is happening for two reasons:

Because England is one of 194 countries that have signed on to the United Nations Convention on the Rights of the Child (UNCRC), a legally binding international agreement.

It pretty much dictates the government can do what it feels is best for a child, not the parents.

Only two countries have not signed on to that agreement: Somalia, because it has no recognizable government, and the United States, which still values the God-given rights of the parents.

And, yes, this is the law liberals want in the U.S. and are close to passing in California.

The courts, using the UNCRC agreement, cited “established human rights law,” which dictates that the rights of a child should take precedence over the rights of the parent.

Sadly, Charlie’s parents said the delays caused by the government make treatment no longer viable for their little child.

The parents wanted to take their baby to the United States for experimental treatment. The UK bureaucrats refused to release him from their care.

But the fundamental question remains: Why can’t the parents decide whether to pursue treatment or not?

In a free society, the parents are their children’s best guardians, not the government.

Ultimately, the case is about parental rights versus government interference.

Why should parents not allowed to do what they believe is right for the child?

Why has the British government become the parent?

Pray the U.S. never signs on to UNCRC.

Pray that the bill in California and other states goes nowhere.

2 Comments on “Charlie and Parental Rights Vs. the Government [Video]”