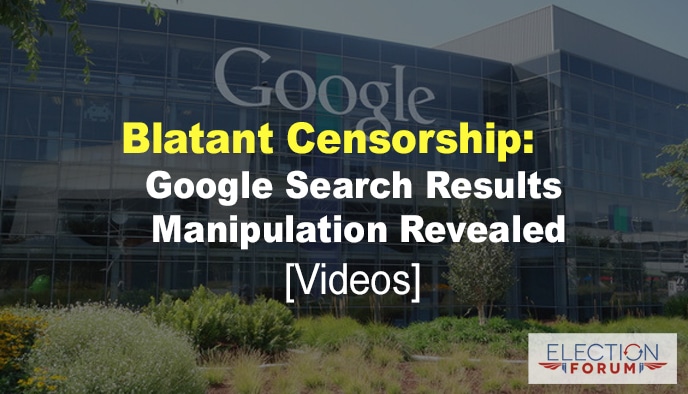 Before Congress and TV cameras, Sundar Pichai – CEO of Google – was presented with extensive documentation of Google bias, discrimination and censorship of:

From the questions asked by members of the House Judiciary Committee … and the evasive responses given by Mr. Pichai … Google’s manipulation and censorship of search results became clear.

But suppressing knowledge is even greater power…

If you are searching for knowledge regarding a specific subject, but the entity that distributes knowledge deliberately suppresses certain kinds of knowledge it doesn’t think you should have … while freely distributing the knowledge it wants you to have … who wields the most power?

Answer: the entity controlling what type of knowledge you are able to acquire most quickly and easily…

That entity is Google.

Because Google owns 90% of the worldwide internet search market.

This means that 9 out of 10 people who search for information on the internet use Google’s search engine … and almost everyone on the planet now uses the internet for obtaining information and knowledge.

This makes Google the most influential company – and the most powerful company – in the world.

Conservatives, libertarians, Christians and Republicans all accuse Google of tweaking it’s search engine algorithm to suppress and censor certain articles, viewpoints and web sites that it disagrees with.

Google CEO Sundar Pichai denied this in his testimony…

But the fact is that no one outside of Google knows how its search engine algorithm works.

When I conducted a Google search on the recently-released National Climate Assessment Report, I had to scroll through 18 pages of search results before I found the first article exposing the fraudulent data and scientific analysis used in the report.

And remember, more than 90% of all searches never scroll to page 2 – much less page 18!

This example shows obvious search engine bias toward accepting the alarmist view that global warming is reaching dangerous levels … and that it is being caused by corporations and individuals releasing too much carbon dioxide into the atmosphere.

Yet in spite of this, Mr. Pichai insisted that the Google search engine does not suppress or censor conservative viewpoints or web sites…

If you use Google on your smart phone … and subscribe to location services … your phone sends the following information about you to Google every few minutes:

This information is communicated to Google servers 14 times per hour, 24 hours per day – even if you are not using your phone!

Watch this video regarding the issue of political bias in the Google search engine (5 minutes).


Watch this video regarding the data collection capabilities of the Google operating system (11 ½ minutes).


What do you think? Write me at craig@electionforum.org