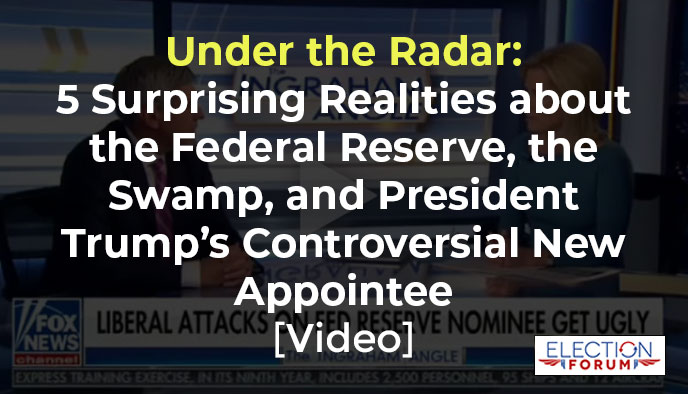 Many times, it has politicized the economy by:

And it has been responsible for economic turmoil that has:

Over the years, I’ve sat on the platform and have spoken along with Stephen Moore at conferences such as FreedomFest.

Steve is smart … and has just been appointed – as an outsider – to the 12-member Federal Reserve Board.

I will be speaking with him again at this year’s FreedomFest in July. I hope you will be able to hear his economic insights and understanding.

Steve Moore said it himself: “Donald Trump wanted to drain the swamp. The Fed IS the swamp.”

And yes … President Trump has just appointed him to the Federal Reserve Board.

And the swamp … the socialists … and the Deep State are going crazy….

They are trashing Stephen Moore’s reputation and trying to reverse the nomination.

Here are 5 surprising facts you should know:

The Federal Reserve manipulates and controls interest rates, the money supply, and much more.

The 12 board members – called governors – consist of the heads of the nation’s 5 regional federal reserve banks, plus 7 governors nominated by the White House and approved by the Senate Banking Committee before being referred to the full Senate for confirmation.

Over the years, Steve and I have talked about the free market, and how it has solutions for our economic ups and downs – solutions often ignored by the Fed.

Steve is a free-market economist. He believes in capitalism. He opposes socialism.

One of the reasons the socialists hate him is because he believes in supply-side economics … similar to Art Laffer.

Supply-side economists believe that people and businesses respond positively to economic incentives such as tax cuts and low inflation. They also believe that sound monetary policy – such as slow or zero growth of the money supply – can help boost the U.S. economy out of a period of stagnation … such as happened after the recession of 2008. Two examples of this are:

Despite President Trump’s pro-business, pro-growth, pro-free market philosophy, the Deep State federal bureaucracy is still trying to harm the economy so it can offer government “solutions.”

Steve Moore will oppose the federal bureaucracy and any policies coming out of it that would harm the economy by raising taxes or by causing price inflation.

Many in the press are calling Moore a puppet of Trump. He is not. He is an independent free-market advocate … and if Trump ever supports a socialistic or non-free-market policy, Moore will criticize him.

Moore is co-author – along with Ph.D. Arthur Laffer – of the 2018 book Trumponomics: Inside the America First Plan to Revive Our Economy. This book explains the president’s policies of economic populism … which is causing the economic boom we are now seeing.

The name-calling and character assassination are in high gear:

Taylor goes on to trash Moore further, calling him “an ideologue and a pundit.”

Because – Taylor whines – Moore is not “a trained economist” with a Ph.D. in the field.

Neither is Fed Chairman Jerome Powell … and in fact, most of the past Fed chairmen have not been Ph.D. economists.

But if you go along with “Beltway Establishment” fiscal and economic policies, you are immune from criticism about your academic qualifications … and about your tax disputes with the IRS.

He supported Donald Trump’s 2016 presidential campaign call for the establishment of a monetary commission to look inside the Fed and uncover any hidden policies that are having negative economic impacts.

Many are also beside themselves because Moore called for the Fed to follow a “price rule” that tracks oil and other commodities in setting interest rates.

The “price rule” is used to tame inflation. It was used during the Reagan administration.

Moore’s response to the Fed’s gyrations: “Keep the rules stable over time, and you’ll have a stable price system.”

Moore will bring sanity and stability to our economic system … and this could be a big first step in determining whether the Fed can be reformed – or whether it’s even necessary for it to exist.

But all key Fed decisions are made by the full committee of up to twelve members. Moore will be one voice at the table.

There will be over 2,000 “Wild West” free-market enthusiasts in attendance … and over 200 speakers and workshops to choose from.

It’s the largest free-market business and investment conference of the year.

A few of the other popular speakers include:

There’s an early-bird discount available if you register now. Click here for information.

I hope to see you there!

Watch this 4-minute video about the vile and nasty attacks on Stephen Moore.