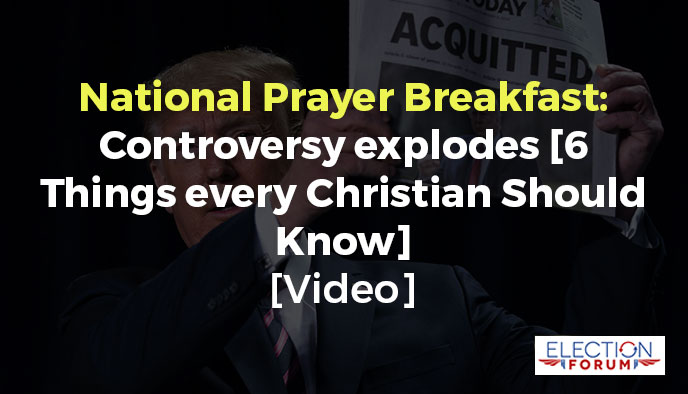 The 68th annual National Prayer Breakfast exploded with tension and controversy this year.

1. The media largely ignored the event – except for the Donald Trump vs. Nancy Pelosi controversy.

This major annual prayer breakfast was covered live by FOX but ignored by all the other media … until Trump spoke.

Then every news media covered it – mostly condemning President Trump.

2. The speakers, worship and special guests were well received.

Author and Professor Arthur Brooks was the keynote speaker for over 3,500 guests, including President Trump and Nancy Pelosi

He called for Biblical love describing himself as a “follower of Jesus.”

He spoke about Jesus’ love and His call to love – not just to tolerate – our enemies. He quoted from Mathew 5, “ You have heard that it was said, ‘Love your neighbor and hate your enemy.’ But I tell you, love your enemies and pray for those who persecute you.”

“[The same Jesus] who taught us to love God and taught us to love each other,” he added. “Today, I’m here to talk to you about the biggest crisis facing our nation and many other nations today: It’s the crisis of contempt and polarization that’s tearing our societies apart.”

He added: “Contempt is ripping our country apart. We’re like a couple on the rocks in this country. Don’t believe it? Turn on prime time TV… it’s tearing our society apart.”

Brooks ended his talk saying, “When you leave this National Prayer Breakfast today, you’ll be back in a world with a lot of contempt. See it as your opportunity.”

He advised the audience to imagine a sign above the door reading, “You are Now Entering Mission Territory.”

“If you see the world, if we see the world outside the room as a mission territory, we might just mark this day as the point at which our nation healing begins,” Brooks concluded.

She sang “Peace from God,” based on Philippians 4:7, “And the peace of God, which surpasses all understanding, will guard your hearts and your minds in Christ Jesus.”

Every president since Dwight Eisenhower has spoken at the annual bipartisan National Prayer Breakfast.

President Trump created as much controversy as President Obama did when Obama attacked Christian history and equated Christianity with other religions.

Trump began his speech by holding up newspapers referring to the impeachment with headlines that read “Acquitted.”

He said, “My family, our great country, and your President has been put through a terrible ordeal by some very dishonest and corrupt people. They have done everything possible to destroy us and by so doing, very badly hurt our country.”

“They know what they are doing is wrong, but they put themselves far ahead of our great country.”

But the big controversy was his unnamed reference to Romney and Pelosi on the impeachment:

“I don’t like people who use their faith as justification for doing what they know is wrong,” he said. “Nor do I like people who say, “I pray for you,” when they know that that’s not so. So many people have been hurt, and we can’t let that go on.”

The media ignored this statement from President Trump:

“I’m sorry. I apologize. I am trying to learn. Not easy. It’s not easy. When they impeach you for nothing, and you’re supposed to like them, it’s not easy, folks. I do my best.”

5. President Trump also spoke of issues of importance to Christians.

He recalled America’s deep religious heritage … and stated – as he has in the past – that our liberty comes from God, not government.

He also talked about:

He spoke about America’s historical respect for faith. “I believe that prayer and faith are the thread that runs through every era of American history,” he said.

He also noted that President Trump “has made it a practice of opening every Cabinet meeting in prayer.”

The event is an opportunity for the U.S. to be the light of the world.

“You are the light of the world. A city set on a hill cannot be hidden.

Watch this video of Cece Winans singing “Peace from God.” (about 4 minutes)