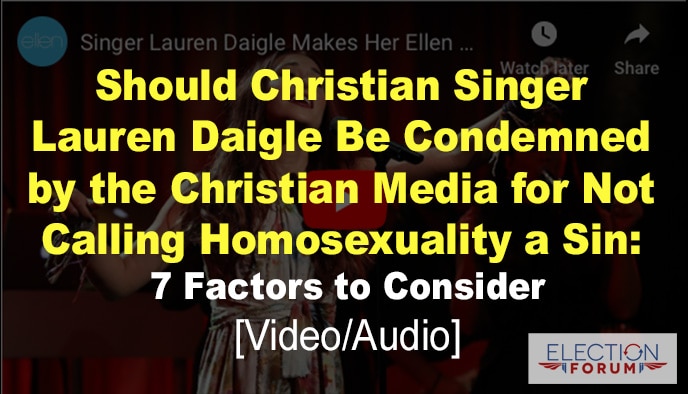 I recently told you about the popular new Christian singing sensation Lauren Daigle appearing on The Ellen Show and singing her hit song “Still Rolling Stones” from her new album Look Up Child.

It was a powerful Christian testimony, not just to Ellen DeGeneres, but also to everyone in the studio audience … and to millions of viewers and fans of The Ellen Show.

Surprisingly, however, many Christians expressed shock and dismay on social media that a Christian performer would appear on a TV show hosted by someone who is openly gay.

In responding to the backlash of criticism Ms. Daigle had this to say in a radio interview:

Following this, Lauren was also interviewed by phone on celebrity publicist Domenick Nati’s radio program. Toward the end of the interview, he asked her point blank, “Do you feel that homosexuality is a sin?”

Here’s how she responded: “You know, I can’t honestly answer on that … um, I don’t know … I can’t say one way or the other … I’m not God, so when people ask questions like that … I just say, ‘Read the Bible and find out for yourself … and when you find out, let me know, ‘cause I’m learning too.’”

For this “weak” answer, she has been bashed by the Christian media … “publicly lynched,” according to one sympathetic Christian songwriter and worship leader.

Is this how Christians should treat other Christians who stumble while attempting to glorify the Lord and do the right thing?

Here are 7 factors those who are criticizing Lauren Daigle should consider before they “throw stones” at her:

Over the years I’ve written about pastors who have not been able to answer straightforward Biblical questions … and have either dodged issues or compromised. This is wrong because they are teachers and leaders.

If a Christian singer or entertainer is lifted up and looked to as a spiritual role model – as Lauren Daigle has been lifted up – one would hope that she would have enough spiritual grounding, maturity … and understanding of the Scriptures … to handle tough questions like this.

But apart from attending a formal apologetics training program, there is no way to prepare in advance to adequately answer yes-or-no-type questions that require more than a yes-or-no answer.

And the broadcast media – and social media – can be heartless, brutal … and cruel.

In today’s post-Christian culture – if you aren’t thoroughly grounded in Scripture – it’s very easy to get caught up in the tide of basing your views and opinions on feelings rather than on Biblical truth.

Lauren admitted in her interview that she has friends whom she loves who are homosexuals. If some of those friends also say they love the Lord, their dichotomous lives could easily cause an immature Christian to become confused about whether or not homosexuality is a sin.

Many Christians who have struggled with same-sex attraction or other sexual sins – and have succumbed to temptation and have fallen into an ongoing pattern of sinful behavior – have been delivered from their sinful lifestyle through the power of the Holy Spirit.

In the apostle Paul’s first letter to the Corinthians, he writes, “Or do you not know that the unrighteous will not inherit the kingdom of God? Do not be deceived: neither fornicators, nor idolaters, nor adulterers, not effeminate, nor homosexuals, nor thieves, nor the covetous, nor drunkards, nor revilers, nor swindlers, will inherit the kingdom of God. Such were some of you; but you were washed, but you were sanctified, but you were justified in the name of the Lord Jesus Christ in the Spirit of our God.” (1 Corinthians 6:9-11)

And of course, they should teach her Romans 1 along with the prohibitions of homosexuality in Leviticus 18 and in other Old and New Testament passages.

Responses such as these to Lauren Daigle’s interview misstep would be much more edifying – and a much better Christian testimony – than the harsh criticism and condemnation they have been leveling at her.

Here is Lauren Daigle’s performance of “Still Rolling Stones” on The Ellen Show.

13 Comments on “Should Christian Singer Lauren Daigle Be Condemned by the Christian Media for Not Calling Homosexuality a Sin: 7 Factors to Consider [Video/Audio]”