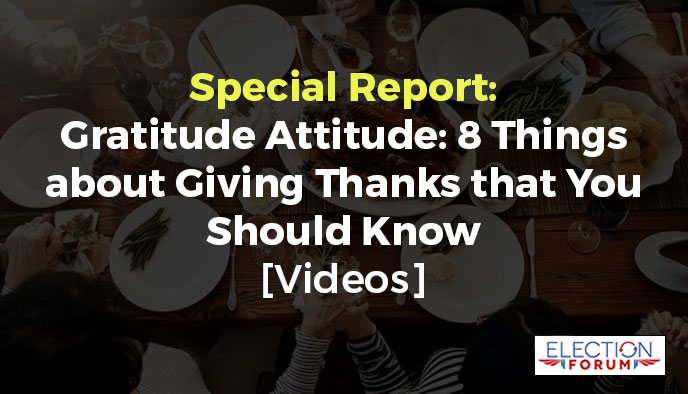 A turkey feast with family and relatives…

Two days off from work…

These may be some of the more modern, traditional reasons for being thankful during the Thanksgiving holiday.

It should be a daily activity – an integral part of a healthy lifestyle.

Here are 8 reasons why it’s important to be a thankful person – reasons that you probably didn’t learn in school:

1. Being thankful makes you happier.

In recent psychology research studies, expressing gratitude has been consistently and strongly associated with greater happiness.

Here’s a link to an article from Harvard Medical School that contains details about research on gratitude. Click here to read the article.

For Christians, giving thanks to God changes our focus from ourselves and our difficulties to God’s character – His infinite love, mercy, grace, kindness, forgiveness and faithfulness toward us.

This changes our mood and lifts our spirit… And it has a soothing effect on our emotions.

2. Being thankful will give you peace and comfort during difficult times.

Some of you may be facing severe financial hardship this year – which is always difficult, but especially during the holiday season…

Or you may be dealing with serious health issues … or you may have lost everything in a fire, flood, hurricane or some other natural disaster.

At one time or another, all of us have had to endure trials, tribulations and troubling circumstances … and we all do battle every day with our own personal demons.

Giving thanks in spite of difficult circumstances helps us to remember that God is in control – and that He loves us and cares for us no matter what negative circumstances we might be experiencing.

In Philippians 4:6-7, the apostle Paul instructs us:

Be anxious for nothing, but in everything by prayer and supplication with thanksgiving, let your requests be made known to God. And the peace of God, which surpasses all comprehension, shall guard your hearts and minds in Christ Jesus. (NASB)

God is our refuge and strength [mighty and impenetrable to temptation], a very present and well-proved help in trouble. Therefore we will not fear, though the earth should change, and though the mountains be shaken into the midst of the seas… The Lord of hosts is with us; the God of Jacob is our refuge [our high tower and stronghold]. Selah [Pause, and calmly think of that]!
(Psalm 46:1-2, 11, Amplified Bible)

3. Being thankful lifts the spirits of those around you.

No one wants to be around someone who is miserable … or who is always angry and frustrated.

That’s probably why Psalm 1:1 cautions us against hanging around places where scoffers and mockers gather.

By contrast, being thankful produces a spirit of peace, joy and comfort which affects your countenance and your attitude.

When other people notice your positive attitude, they’ll be attracted to you and will want to be around you because of the support and encouragement they will receive.

4. Being thankful is God’s will for your life – it’s an act of obedience.

If God created you in His image, it makes sense that He knows how your mind and body are wired together … and what activities and thought processes will be the most beneficial to you…

“Rejoice always; pray without ceasing; in everything give thanks, for this is God’s will for you in Christ Jesus,” (1 Thessalonians 5:16-18, NASB)

Rejoice … Pray … Give thanks. All 3 verbs go together and are to be actively engaged in simultaneously.

The phrase “without ceasing” in New Testament Greek comes from a word that is used to describe a hacking cough that won’t go away … the kind of cough where you think you’ve cleared your throat and have gotten rid of it, but a minute or so later, it comes back again.

In another New Testament passage – Ephesians 5:15-20 – giving thanks results in several “side effects:”

Over and over again in the Old Testament, the Israelites are commanded to “give thanks to the Lord, for He is good; for His lovingkindness is everlasting.”
(for example, 1 Chronicles 16:34, Psalm 106:1, Psalm 136:1)

5. Being thankful opens the door to blessings from God.

Notice the connection between thanksgiving and the peace of God in the passage above from Philippians 4.

The peace of God is a special inner peace that prevails despite personal circumstances … despite political turmoil … despite national and world conflicts.

Who doesn’t want to have a life characterized by inner peace no matter what turmoil is occurring all around them?

And who doesn’t want to be around someone who handles trials and tribulations with calmness and grace – and a sense of peace – rather than panic and fear?

Other blessings for being thankful will be special friendships and the positive feedback of people with whom you come in contact.

6. Being thankful reminds us that we are dependent on others … and on God.

We’ve been created and wired psychologically, emotionally and spiritually to be interdependent on others … and dependent on our Creator.

No one survives infancy without the love and support – both physical and emotional – of a mother or other human being.

However, both are important. Too much of one and not enough of the other will always lead to all sorts of human problems … eventually resulting in evil and suffering.

7. Not being thankful will result in a downward spiral of rebellion, foolishness and evil.

It is NOT a sign of weakness, as some media messages may suggest.

In contrast, refusing to be thankful is a major character flaw… It’s a sign of pride and foolishness.

Romans 1:18-32 is a stark warning of the dire consequences of suppressing the truth of the existence of God which is abundantly evident through nature and the natural world.

I won’t quote the entire passage … I encourage you to read it for yourself.

But listen to just a portion of the warning … it describes the beginning of a downward spiral of destruction that accompanies the refusal to be thankful:

“For since the creation of the world His [God’s] invisible attributes, His eternal power and divine nature, have been clearly seen, being understood through what has been made, so that they are without excuse. For even though they knew God, they did not honor Him as God or give thanks, but they became futile in their speculations, and their foolish heart was darkened. Professing to be wise, they became fools, and exchanged the glory of the incorruptible God for an image in the form of corruptible man… For they exchanged the truth of God for a lie, and worshipped and served the creature rather than the Creator…”

Here’s a summary of the downward spiral that occurs in the heart of a person who refuses to be thankful:

8. Being thankful is a behavior you can cultivate and develop in your life.

Here are some ideas of things you can do to develop a more thankful heart:

If you are a Christian, here are a few other suggestions for developing the habit of thankfulness and gratitude:

This Thanksgiving, I encourage you to begin – if you haven’t already done so – to cultivate the habit of giving thanks each and every day – thanks to God for giving you life and sustaining it … and thanks to others for their impact and influence on your life.

Watch this video about the first thanksgiving in Plymouth, Massachusetts in 1621 (5 ¾ minutes).