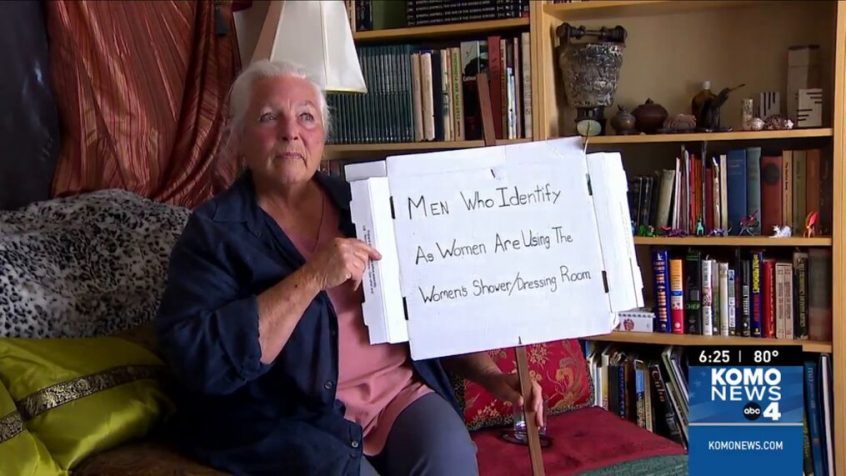 Little did she know that her “good deed” would put her in the center of controversy, get her national attention, and death threats from fanatics.

Eighty-year-old, Julie Jaman was banned from her local YMCA because she complained to the managers that a man, dressed in a woman’s bathing suit, came into the woman’s locker room and was watching a bunch of little girls undressing. The man also walked around naked, on different occasions, also while little girls were present.

Jaman who had been going to the same YMCA for over 35 years, was well known and well-liked by all accounts. She’s never been a problem and has never been known as a “complainer” or “troublemaker.”

But when Jaman saw what was happening in the locker room, she just couldn’t keep silent, especially when there were little girls involved.

“I was in the shower when I heard a man’s voice,” Jaman said. “I turned around and saw a man watching these little girls as they were taking off their swimsuits.”

That’s when Jaman confronted the man and got the attention of an employee, who explained that the man, Clementine Adams, was also an employee.

Jaman explained, “I asked the man if he had a penis. He said it was none of my business. That’s when I told him to get out.” Then she asked the employee and the manager to get the man out of the woman’s locker room.

That’s when things turned upside down for Jaman. Instead of ejecting the man, the manager told Jaman, “She was discriminating,” and told her she couldn’t use the pool anymore and that he was calling the cops.

As the 80-year-old tried to leave, the manager and several employees told her that she couldn’t leave because the police were on the way.

Later, when Jaman got home, she received a call from the CEO of the YMCA, Wendy Bart, who told Jaman that she was banned from the pool.

When Jaman asked ‘why?’ Bart told her that employees said she was shouting accusations at the man that “he was going to stick his f**ing penis in those little girls.”

Jaman denied the accusation, telling the CEO, “I’m an 80-year-old woman and I do not talk like that.”

As for the “man”, Adams has set up a GoFundMe campaign to help fund “her” sex reassignment surgeries. So far “she’s” raised over $14,000 dollars.

This incident has exposed a dangerous aspect of “open” or unisex bathrooms.

Any pedophile, peeping tom, molesters, and rapists can “declare” that they “identify” as a woman and have free access to enter any women’s bathroom, shower, or locker room, any time they want.

This is a clear and present danger to girls and woman, and to anyone who speaks out against these dangerous policies.

For example, when Jaman and some supporters held a rally in front of the YMCA to lift the ban on her, angry LGBTQ protestors viciously yelled down the speakers, disrupting the event, and even assaulted some of Jaman’s supporters.

Although Jaman feared that she might be assaulted, she finished her speech, saying that “we must fight back.”

It’s insane to change everything for a small subset of the population, especially if it will endanger women and girls.

According to the latest data, roughly 1.6% of the U.S. population identifies as transgender or nonbinary — that’s about 1 in 20. Most are under 30 years old.

These percentages have doubled in the last 5 years, and it’s no wonder given how schools, the military, the Biden Administration, Hollywood, and the media have been heavily pushing LGBTQ indoctrination of our children, confusing them into believing they are trans… or that it’s “cool” to be trans (some might be lying in a vain attempt to get attention).

This is becoming more and more obvious as the administration continually ignore the needs and rights of most Americans, who don’t want LGBTQ ideology forced down their throats.

It would be much safer for everyone if establishments, who support LGBTQ ideology, would add a separate bathroom/locker room for transgenders and identifiers —Otherwise keep things the same and help stop the dangers to women and children.

5 Comments on “Danger to Girls: The Insanity of Transgender Bathroom/Locker Room Extremism [Video]”