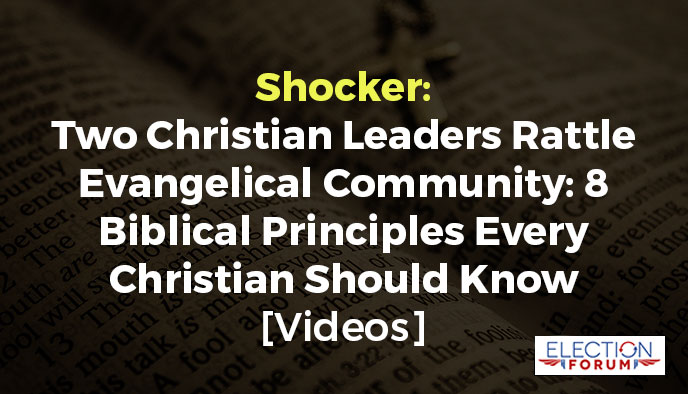 It’s devastating when you hear of a pastor or other Christian leader turning his back on Christianity and rejecting the God he or she has trusted in and worshipped for many years.

Recently, two prominent Christian leaders have declared they are no longer Christians:

The name Joshua Harris may not ring a bell, but if you had kids in the 1990s and early 2000s, he was probably one of the most famous authors evangelicals had their kids read … and that parents would read as well.

At the age of 23, Joshua Harris wrote a book called I Kiss Dating Goodbye. The book became a bestseller and was extremely popular in Christian circles.

At that time, I was a singles’ pastor and I would read every book I could find on dating, divorce and remarriage. I read a lot of books.

When I got to Harris’ book, something didn’t feel quite right. It sounded a little bit legalistic … it felt a little bit unrealistic … and it felt just not right.

While the book’s main emphasis was embracing a courtship model of dating that in many ways was what I would teach, it included avoiding physical contact, which stretched a whole extra biblical doctrine.

Harris went on to become a pastor in Maryland between 2004 and 2015, resigned and then went back to school.

In expanding on his social media announcement that he was divorcing his wife, he expressed support for the LGBTQ+ community and apologized for “the views that I taught in my books and as a pastor regarding sexuality.”

Australian contemporary worship music singer, songwriter and musician Marty Sampson has been with Hillsong Church in Sydney since he was 16 years old. He is now 40…

He wrote the powerful and popular worship song, “All I Need Is You.” In his since-deleted Instagram post, he wrote, “How can God be love yet send four billion people to a place, all ‘coz they don’t believe? No one talks about it…”

He also said that Christianity “just seems like another religion at this point.”

In response to a Christian Post op-ed directed at him, Sampson clarified he doesn’t believe he has “renounced” his faith … but that “it’s on incredibly shaky ground.”

He admits he’s “struggling with many parts of the belief system that seem so incoherent with common human morality.”

These shocking confessions of walking away from the true and living God have several ramifications. Here are 8 biblical principles every Christian should know:

“But the Spirit explicitly says that in later times some will fall away from the faith, paying attention to deceitful spirits and doctrines of demons, by means of the hypocrisy of liars seared in their own conscience as with a branding iron…”

Most people reading this know someone who has fallen away from the Lord. Sadly, many are kids.

With greater responsibility and with greater ministry impact comes greater temptation and stronger attacks from Satan and his demons.

Atheists and skeptics rejoice when a prominent Christian leader turns away from his or her faith … while Christians groan.

I have ministered at two churches where the pastor himself has fallen away from the Lord. The impact of people saying they won’t go back to church because they are so shattered and disappointed that they cannot fellowship anymore is a real tragedy.

And Proverbs 3:5-6 commands us: “Trust in the Lord with all your heart and do not lean on your own understanding. In all your ways acknowledge Him, and He will make your paths straight.”

We are all broken people living in a broken world. We all make mistakes … and we live with people who make mistakes. No one is exempt, not even pastors and Bible teachers.

Our trust must be in the Lord and in Him alone. Acts 17:11 tells us that the Bereans received Paul’s message with great eagerness, but they examined the Scriptures every day to see if what Paul said was true.

The next two verses in Proverbs 3 say, “Do not be wise in your own eyes; Fear the Lord and turn away from evil. It will be healing to your body and refreshment to your bones. (Proverbs 3:7-8)

It’s extremely important for all Christians – but especially for pastors and Christian leaders – to be constantly hearing, reading, studying, meditating on and memorizing God’s word.

Without saturating our minds daily with God’s thoughts and words, we will be subject to the influence of Satan’s lies and the words of men.

There’s nothing wrong with questioning our faith … and even doubting our faith … but the answers to our questions and the reassurances to overcoming our doubts are found in Scripture, not in the opinions of fallible men and women.

Ultimately, we will all stand before the throne, the judgment seat of Christ. People may question their faith, but making a decision to leave the faith has consequences.

If God can open the mouth of a donkey and use a beast of burden to communicate His word to His prophet, surely He can use anyone – even a secret unbeliever – to preach His truth.

You can read the incredible story of how God spoke His word through a donkey in Numbers 22.

Also, in Isaiah 55:10-11, we are reminded, “For as the rain and the snow come down from heaven, and do not return there without watering the earth and making it bear and sprout, and furnishing seed to the sower and bread to the eater; so will My word be which goes forth from My mouth; it will not return to Me empty, without accomplishing what I desire, and without succeeding in the matter for which I sent it.

Even if Marty Sampson decides to turn away from Christ completely, his worship songs will still be powerful and uplifting … and will encourage many believers.

And Joshua Harris’ sermons and books will still minister to people’s hearts even though he has left the faith.

It’s not our place – according to Matthew 7:1 – to judge others. The authority to judge the thoughts and intentions of the heart – and the condition of the soul – belongs to Christ … and Christ alone.

Some might be tempted to say Josh Harris was never a born-again Christian at all, because if he was, he wouldn’t have been able to reject Christ.

Others might argue that it’s possible to lose your salvation after you have it … while still others will argue that “once saved, always saved” no matter what.

The fact of the matter is, we don’t know the answer as to where someone who once embraced Christianity and then rejected it will spend eternity.

We should also pray for the Christians who have been damaged in their own faith by the falling away of their pastor or other trusted Christian leader.

There has been real damage done to people who looked up to them, trusted in them, and now are shattered by their rejection of Jesus Christ.

Pray for restoration of their faith … and that they would focus on the word of God, not on the words of men.

Remember that we are in a spiritual war for the minds and hearts of people:

“For though we walk in the flesh, we do not war according to the flesh, for the weapons of our warfare are not of the flesh, but divinely powerful for the destruction of fortresses. We are destroying speculations and every lofty thing raised up against the knowledge of God, and we are taking every thought captive to the obedience of Christ…” (2 Corinthians 10:3-5)

Perhaps you are having doubts about your own faith…

Or perhaps you are going through a particularly difficult time right now … and your faith and commitment to Christ are under attack and are being tested.

Know that the Lord is with you. He will never leave you nor forsake you

Also know that “God is our refuge and strength, a very present and well-proved help in trouble. Therefore we will not fear, though the earth should change, though the mountains be shaken into the midst of the seas…” (Psalm 46:1-2, Amplified Bible)

NOTE: All Scripture quotations except Psalm 46 are from the New American Standard Bible translation (NASB).