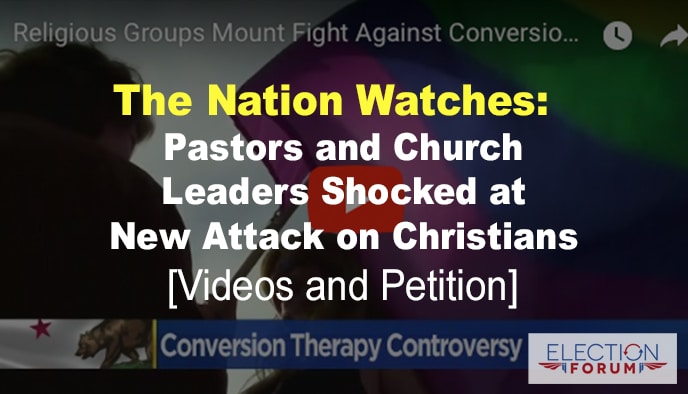 The entire nation is watching…

I just got back from a meeting with 150 pastors in Sacramento … horrified about a new California bill.

The bill – AB 2943 – makes it unlawful for a person to sell counseling services … seminars … possibly even books on Amazon … that claim to help people overcome unwanted same-sex attraction or gender confusion.

The pastors were stunned … shocked … disturbed…

Even the Bible or a sermon could be the target of a lawsuit if this bill becomes law.

And if the California bill passes, other states will quickly introduce similar legislation.

AB 2943 bans “advertising, offering to engage in, or engaging in sexual orientation change efforts with an individual” by labeling it a fraudulent business practice – subject to fines and penalties.

The bill explains the meaning of sexual orientation change efforts as “any practices that seek to change an individual’s sexual orientation. This includes efforts to change behaviors or gender expressions, or to eliminate or reduce sexual or romantic attractions or feelings toward individuals of the same sex.”

This bill violates our freedom…

One of the co-sponsors of the bill makes the claim: “To advertise that you can change someone’s orientation is simply that—fraudulent.”

There are 2 problems with this claim:

That’s a big difference … a difference that those who don’t believe in the power of God don’t understand.

They are sharing their stories of how they were delivered and transformed – by the power of Jesus Christ – from same-sex attraction.

Many of these Christians are now happily married and have children of their own.

Watch the powerful testimony – attended by over 150 California pastors – from several of those who have been transformed (11 minutes):

The pastors in attendance realized the attacks on people of faith by the progressive left are increasing … and intensifying.

Please pray that AB 2943 will be defeated in the California Senate – or if passed and signed into law by Governor Brown … that it will be ruled unconstitutional in the courts.

Watch this CBS 13 news report from the California state capitol in Sacramento
(2 ½ minutes):

7 Comments on “The Nation Watches: Pastors and Church Leaders Shocked at New Attack on Christians [Videos and Petition]”