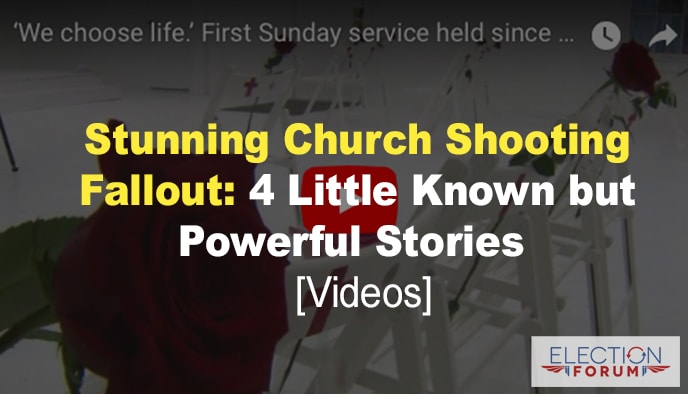 Four critical stories have emerged in the wake of the Texas church shooting:

No. 1: In the Aftermath of the Shootings, Jesus Christ is Being Proclaimed.

Immediately following the shootings, Jesus was being proclaimed in print and on television by townsfolk who leaned on God during this tragedy.

When Shelly and I first watched the last church service on YouTube, it only had a couple of hundred views. Hours after the shooting it had thousands of views.

After many people – Christians and non-Christians – watched, it went over the million mark.

God’s word went forth, the salvation story was told, the balm of redemption spread far and wide.

And now, the First Baptist Church of Sutherland Springs held its first Sunday service since that horrific day when a deranged gunman killed 26 people.

“Rather than choose darkness, we choose life,” said Pastor Pomeroy, whose own 14-year-old daughter was killed by shooter Devin Patrick Kelley.

Again, the secular media broadcast the gospel to millions of viewers.

The church itself has been turned into a memorial, and services attended by hundreds of people were held in nearby tents.

He said, “Faith is the antidote to fear and despair.”

No. 2: More Gun Control Is Not the Answer

It should come as no surprise that liberals were quick to pounce on the mass shooting as further proof more gun control is needed.

Since it doesn’t fit its narrative, the liberal media has all but ignored the man who grabbed his rifle and shot the deranged gunman.

When an audience member on NBC’s “Today” show asked Biden, “How do you justify the Democrat view on gun control when the shooter was stopped by a man who was legally licensed to carry a gun?”

(The man used a semi-auto AR-15 rifle, similar to the type used by the killer.)

Biden’s answer was incredulous. He said “Well, first of all, the kind of gun (the hero) was carrying shouldn’t be carried.”

Ah, the mind of the liberal elite.

More gun control laws would not have stopped this shooting.

Fact is, more churches are realizing the need to be armed and vigilant. They are incredibly vulnerable. (For more on this CLICK HERE to read our previous write-up of churches as “soft targets.”

Establishment Republican Texas Senator John Cronyn was also quick to politicize the tragedy, calling for fixing a broken “background check” system and making guns harder to get if you have a criminal background.

First, the background check system is not broken.

Had the Air Force, a bloated bureaucratic government agency, followed procedure and alerted law enforcement agencies to the shooter’s discharge over a domestic violence past AND being held for psychiatric evaluation, Kelley would have been prevented from buying firearms.

Second, there are federal laws preventing criminals (felons) from purchasing or owning a gun.

Pence rightly put the blame for the shooter’s ability to buy multiple weapons, including a semi-automatic rifle, on a bloated government.

Pence blamed “bureaucratic failures” that allowed the shooter to buy the Ruger AR-556 rifle he used at the church, despite having been admitted to a psychiatric hospital while he was in the Air Force.

Federal law prohibits gun possession by anyone who “has been committed to any mental institution.”

There were laws on the books that could have prevented this tragedy had they been enforced.

The NRA is Blamed Once Again

Pence’s remarks stand in stark contrast to Rep. Ted Lieu, a Democrat from Southern California, who walked out during a moment of silence held on the floor of the U.S. House of Representatives for the Texas shooting victims.

He even Tweeted, “Screw the NRA,” making reference to the group’s strong 2nd Amendment, pro-gun lobbying.

“I will not be silent,” he said. “What we need is action, we need to pass gun safety legislation now.”

What Ted Lieu means is he wants to see a total gun ban. After all, strong “gun safety legislation” is doing nothing to prevent the wholesale killings in Chicago on a weekly basis. Ted Lieu won’t mention that.

No. 3: The Liberal Elites Attack Faith and Prayer

Right after the shootings, the most vile and disgusting Tweets went up from Hollywood elitists, attacking faith and prayer.

Speaker of the House Paul Ryan was attacked by thousands on Twitter after he called for prayers in the wake of the shootings.

Actor Wil Wheaton replied to Ryan: “The murdered victims were in a church. If prayers did anything, they’d still be alive, you worthless sack of ****.”

Actor Michael McKean wrote: “They were in church. They had the prayers shot right out of them. Maybe try something else.”

Others said gun control is the answer, not prayer.

“The murdered victims were in a church. If prayers did anything, they’d still be alive,” said one Tweet.

Gun laws cannot take evil out of the heart, only God can.

Ephesians 6:12 sums up our constant battle on Earth against evil.

“For we are not fighting against flesh-and-blood enemies, but against evil rulers and authorities of the unseen world, against mighty powers in this dark world, and against evil spirits in the heavenly places.”

Evil will be conquered.

The enemy is already defeated by Jesus on the cross.

The enemy may look like he is winning a battle or two but he won’t win over Jesus Christ our King.

Watch this short news clip on the first service held at First Baptist Church since the shootings.