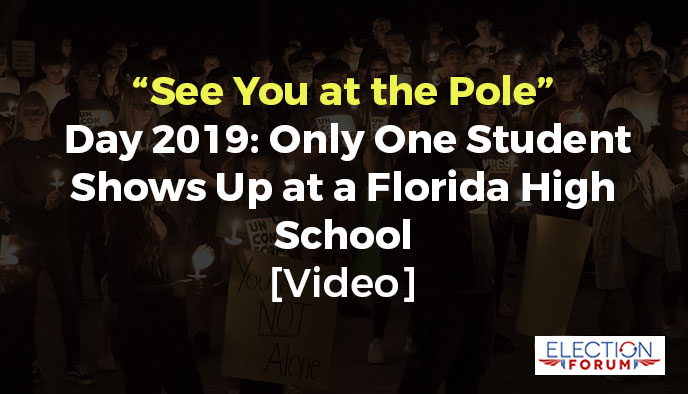 It showed commitment and determination…

That’s right. He stood in front of Lake Minneola High School near Orlando, Florida … praying … alone … the only one from the 1,800-member student body.

No one else came … no one else joined him to pray for his school.

So Hayden remained at the flagpole alone, praying that his standing alone would have an impact.

Members of the community who saw Hayden praying alone went on social media and praised his character and his courage in standing up for his beliefs.

Where were all the other Christian students at Lake Minneola High School on “See You at the Pole” Day this year?

There’s no question that high school students at Lake Minneola – and at every other high school in the nation – need much prayer.

Two years ago, a Lake Minneola sophomore shot and killed himself in front of the school just before a scheduled fire drill. Both teachers and students gathered and prayed on campus that day … that the student’s life would be spared.

Fortunately, that student survived his attempted drug overdose in the school nurse’s office.

But with so many school shootings and teen suicides taking place in these days, you’d think students, teachers and parents all would be taking advantage of every opportunity to pray publicly and openly for peace and spiritual revival on our school campuses and in our families.

Why is this not happening?

Is it perhaps because the “progressive” media and the socialist politicians constantly mock prayer as an exercise in futility … and as a ludicrous waste of time?

We have a spiritual enemy – an adversary – prowling around “like a roaring lion, seeking someone to devour.” (1 Peter 5:8)

Let’s pray that Christian students everywhere will recognize the power of prayer … and will ignore the mocking of social media, the news media, the politicians … and their unbelieving friends…

These students are the future government employees, politicians and leaders of the U.S.

One Comment on ““See You at the Pole” Day 2019: Only One Student Shows Up at a Florida High School [Video]”