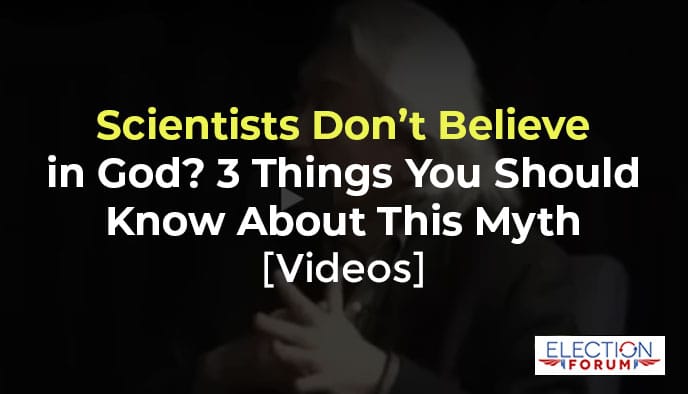 But that is not true.

Here are 3 things you should know about science and God:

In fact, Kaku revealed that many top physicists, like himself, do believe in God due to the intelligent design of the universe. Kaku believes that this world could be one of chaos and disorder … but that’s not what he sees. Instead he sees a world of beauty and life. That is evidence of a Creator.

In an interview with Science World News, the theoretical physicist says of the observable universe: “It’s based on music or little vibrating strings, thus giving us particles that we see in nature.  The laws of chemistry that we struggled with in high school would be the melodies that you can play on these vibrating strings.  The Universe would be a symphony of these vibrating strings and the mind of God that Einstein wrote about at length would be cosmic music resonating through this nirvana … through this 11-dimensional hyperspace — that would be the mind of God.”

Continuing the interview, Kaku says, “I have concluded that we are in a world made by rules created by an intelligence … Believe me, everything that we call chance today won’t make sense anymore.  To me it is clear that we exist in a plan which is governed by rules that were created, shaped by a universal intelligence and not by chance.”

“The final solution resolution could be that God is a mathematician,” he added.

This statement proves that science can be used to point to the existence of God, rather than used to try to disprove His existence.

Psalm 19:1 states: The heavens declare the glory of God; the skies proclaim the work of his hands.”

The very universe – by its complexity – proclaims the glory of God.

The scientists who believe science and faith cannot coexist are condemning and attacking him.

But science is based on faith:

Albert Einstein held some of the same beliefs as Michio Kaku – that the universe is a sign of an intelligent creator.

Speaking on his faith, he had said this: “As a child, I received instruction both in the Bible and in the Talmud. I am a Jew, but I am enthralled by the luminous figure of the Nazarene. No one can read the Gospels without feeling the actual presence of Jesus. His personality pulsates in every word.”

The nucleus of every atom contains positively-charged protons and uncharged neutrons. By the laws of electricity and magnetism, the protons should repel each other … and the atoms should disintegrate. But they don’t…

When I was in college years ago, they called this inexplicable force the nuclear binding force. Today they just call it the nuclear force … or the residual strong force.

The cause of this force – and its purpose – is explained in the apostle Paul’s New Testament letter to the Colossians. In talking about Christ, Paul says, “He is the image of the invisible God, the firstborn of all creation.” (Colossians 1:15)

Then he says, “For by Him all things were created, both in the heavens and on earth, visible and invisible, whether thrones or dominions or rulers or authorities – all things have been created through Him and for Him. He is before all things, and in Him all things hold together.” (Colossians 1:16-17)

Watch this video of Michio Kaku talking about life and God (about 3 minutes).

And in case you missed it in a previous issue of Reality Alert, here is a 3 ½-minute video dealing with the question, “Where did God come from?”

One Comment on “Scientists Don’t Believe in God? 3 Things You Should Know About This Myth [Videos]”