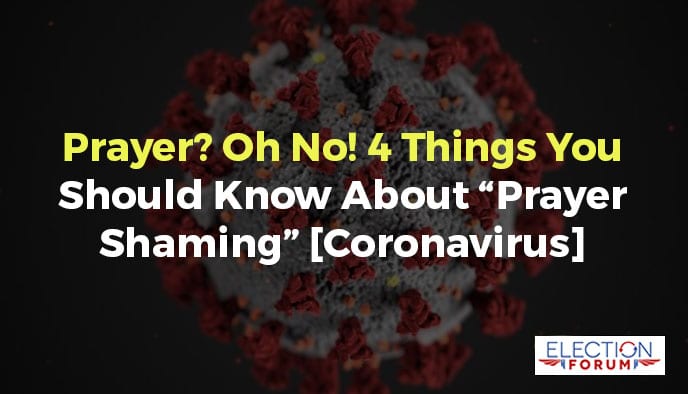 It blew up social media.

It was an attack on prayer.

It was an attack on Christianity.

He had the audacity of beginning the first meeting in prayer.

1. His prayer created a massive media attack of “prayer shaming.”

Prayer shaming is where the media – TV, radio, and social media – helps spark ridicule of people who offer “thoughts and prayers” after tragedies such as sickness, tornados, shootings, and more.

“Symbolic of the moral and intellectual decay at the White House, a photo shows Vice President Mike Pence and his team trying to pray away Coronavirus.”

Pence and his team were accused of “wallowing in ignorant superstition and willful ignorance.”

“It’s not a joke when people say these Republicans are trying to stop a virus with prayer. What else did anyone expect? Science? Reason? Something sensible?”

A viral tweet of the photo had this caption “Mike Pence and his Coronavirus emergency team praying for a solution. We are so [blanked].”

3. The reality is that in today’s post Christian culture, prayer is considered poison.

The media try to make prayer political poison – an attack on science, reason, and progress.

This is really a clash of world views.

It believes that science, the intellect, technology… and money… can solve all problems — and that government is the key to all problem solving.

But the idea that the state – collectivism – can solve every problem is misplaced “faith” in broken, sinful man.

History is full of the failures of mankind…

Climate change. Gun violence. And, yes, Coronavirus. All these supposedly can be solved by more government passing the right laws and controlling people’s lives by bureaucratic and corrupt policies.

The secular world view says that salvation from Coronavirus will come from the government or from man’s efforts apart from God.

In the Christian world view, man’s efforts are based on trust in a loving, omnipotent, omniscient God.

As psalmist says in Psalm 2 and Psalm 4, although nations may rage, and people may plot in vain against the Lord and against His anointed one (Psalm 2:1-3), only the Lord makes us dwell in safety (Psalm 4:8).

5 Comments on “Prayer? Oh No! 4 Things You Should Know About “Prayer Shaming” [Coronavirus]”