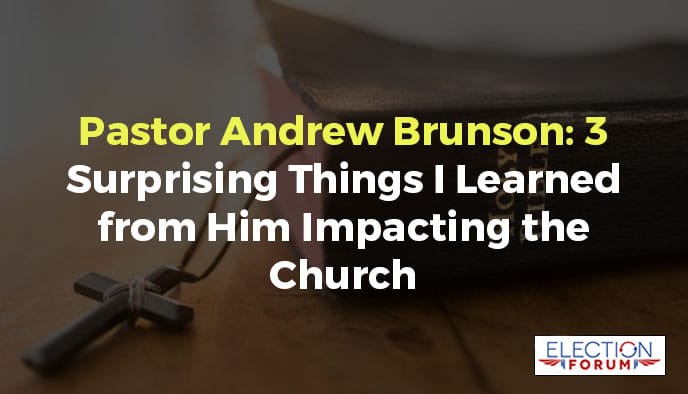 When I was at the National Religious Broadcasters conference recently, I was excited to hear Pastor Andrew Brunson speak. I met with him privately afterwards.

For over 20 years Pastor Brunson was a Christian missionary in Turkey specializing in evangelism to the Muslim world.

He was arrested, falsely accused of belonging to a rebel anti-government terrorist organization … and was imprisoned for two years because of his faith in Christ.

When I talked to Andrew, his number one passion was still missionary work in the Muslim world. Pastor Andrew had two key takeaways for Americans.

1. A warning to American Christians.

He warned that being a Christian in the U.S. may soon come with great personal risk as the culture becomes increasingly “hostile” to believers.

“There is a price to following Jesus,” Brunson told hundreds gathered at the National Religious Broadcasters Convention in Nashville, Tennessee.

“There is a price in other countries. We hear about that. But increasingly, I think that there will be a price to be paid here.”

According to Brunson, the “media, political, the business classes, most of academia are becoming increasingly hostile to those who identify publicly with Jesus Christ and with His teaching.”

“I feel a sense of urgency in my heart for this generation in my country. I feel it especially for my children’s generation, that they’re not prepared to stand. I’m not sure that everyone in this room is ready to stand for Jesus without apology.”

“We prepare ourselves now. We need to make decisions now about our commitment to Jesus, because otherwise, the natural tendency when difficulty comes is to fear. And when we’re afraid, the natural instinct is to run away, is to compromise.”

“It’s normal to be afraid. The issue is, will you stand in spite of your fear? Will you remain faithful? In the end, people are going to pay a price for the sake of the Gospel. Overseas, yes, but also here… there is a cost to following Jesus.”

2. Hope for evangelism in a Muslim world.

“I believe that millions of Muslims will begin to follow Jesus Christ,” he said. “What God has shown us is that this powerful move will come in difficult circumstances. God allows the things of the foundations we trust in to be shaken to get our attention. He allows it in our country, and He allows it in other places.”

“There is going to be a harvest in the most dangerous and most difficult places, and this means that there is risk to those who are going to gather the harvest in those places.”

“The wind of God is going to sweep through that area, and many are going to turn to the Lord. Who’s going to follow them up? Who is going to disciple them? A lot of that is going to have to be done through media until churches can be established in those places.”

Many readers know that during his imprisonment we were praying for Pastor Brunson’s release.

When I spoke at groups, I would always show his picture and ask people to pray for him when talking about the persecuted church.

And what brought about his release?

3. How God can use the U.S. government for good.

I mentioned to Pastor Brunson that I was at the first Ministerial for Religious Freedom at the State Department in 2018. Over 350 world leaders from 80 countries were gathered together to focus on religious freedom throughout the world.

During that conference, one of the last speakers was Vice President Pence. He flatly warned Turkey that if they did not release Pastor Brunson, there would be economic repercussions to the country.

And the Vice President laid out a powerful articulate new policy that has never been used in America before… I call it the Pence Policy.

In the Pence Policy, if a country ignores religious freedom and allows the persecution of religious minorities to go on, they can expect from the United States a loss of foreign aid, a loss of military aid, and possibly economic repercussions of other kinds.

Vice President Pence was true to his word. The U.S. applied economic sanctions against Turkey. The economy faltered and a short time later, Pastor Brunson was released.