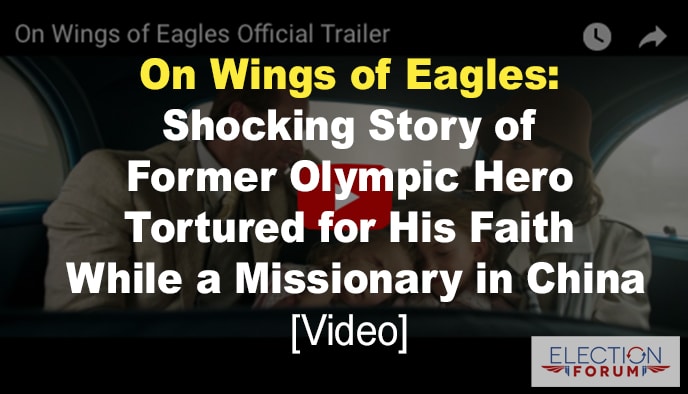 Chariots of Fire is one of my all-time favorite movies.

You probably remember the 1981 movie, “Chariots of Fire,” which told part of the story of Eric Liddell – known as the “Flying Scotsman” – who was the fastest sprinter in the 1924 Olympics.

He was expected to win the 100-meter dash, but withdrew from the event because the preliminary heats were scheduled for a Sunday.

Liddell had never competed on a Sunday due to his evangelical Christian conviction that Sunday should be devoted to worship and rest – not to personal gain or glory.

But he won the gold medal in the 400-meter run, setting a new world record…and also won the bronze medal in the 200-meter event.

My wife and I just saw the “follow-up” movie.

Eric Liddell was born in China to a missionary couple and lived there until he was enrolled at the age of 6, along with his older brother, in a London boarding school for sons of missionaries.

He had always planned to eventually return to China and serve as a missionary along with his parents.

During most of his 20 years as a missionary, he taught in schools, helped neighbors and friends, and proclaimed the gospel to anyone who would listen.

Because of dangerous and unsafe conditions during World War II, Liddell sent his wife and their 2 daughters to Canada in 1941 to stay with her family, while he remained in China.

In 1943 he was captured by the Japanese and sent to an internment camp in north China, where 1800 detainees – many of them Chinese children – were crammed into an area measuring only 150 by 200 yards.

Food was scarce….medicine even more scarce….yet Liddell never complained but continued to teach the children, help the sick and organize sports games to take the minds of the detainees away from their awful living conditions.

Eric Liddell died in the internment camp in February, 1945 at the age of 43 – just 5 months before the camp was liberated.

To find out how he died, go see the movie…

In 1991, a headstone was added to his simple grave on the site where the internment camp was located. An inscription on the headstone from Isaiah 40:31 reads, “They shall mount up with wings as eagles; they shall run and not be weary.”

The film was directed by Stephen Shin, a devout Chinese Christian. However, it’s not as overt in presenting the gospel message as its predecessor, “Chariots of Fire.”

I would describe it as “gospel light.”

Nevertheless, it’s worth seeing. It was released nationwide on November 3rd.

Watch the trailer for On Wings of Eagles at the link below (2 ¼ minutes):