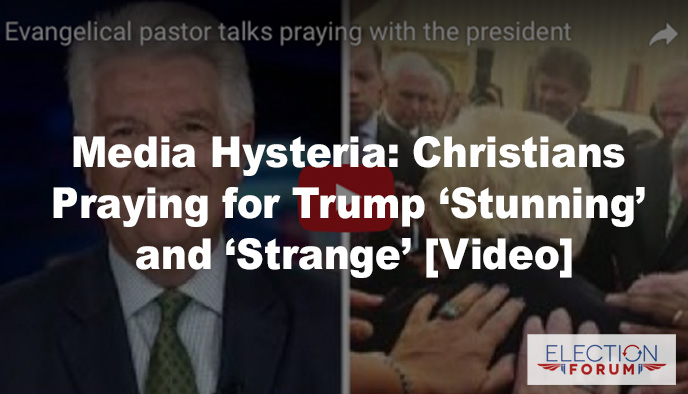 When evangelical leaders gathered to pray for our President, CNN’s Erin Burnett thought it “stunning” and “very strange.”

Previewing the segment, she said “And next, a pretty stunning image. Let me just give you a quick peek of it. The president bowing his head in prayer in the Oval Office and all these people sort of touching him. It’s very strange…”

It seems that the laying on of hands to pray for the President of the United States is a “very strange” concept.

Laying on of hands in prayer is found in the Bible and Christian history.

“Then they began laying their hands on them, and they were receiving the Holy Spirit.”

You see, recently Arkansas Pastor Ronnie Floyd prayed for Trump in the Oval Office, asking for God’s blessing as a large group of evangelical pastors and leaders surrounded him and bowed their heads for prayer. Some of the ministers laid their hands on Trump’s shoulders.

Floyd prayed for protection for the President and the vice president, and for God to lead them, and to rely on the Lord for strength and wisdom.

In this powerful 3-minute video, Texas Pastor Jack Graham talks about how they got to pray with the President.

The faith leaders were at the White House to discuss religious freedom. They were not told ahead of time that they would be ushered to the Oval Office.

On MSNBC’s “AM Joy” the Rev. William Barber II, a huge critic of conservatives and biblical values, called the prayer session “a theological malpractice bordering on heresy.”

Barber said, “When you can pray for a president and others while they are “preying” on the most vulnerable, you’re violating the most sacred principles of religion.”

Christians may not agree with every decision or action by the Trump administration, but praying for them probably isn’t one of them.

1 Timothy 2:1-2 reminds us to pray for our leaders, be it in person or in the privacy of our own homes.

“Therefore I exhort first of all that supplications, prayers, intercessions, and giving of thanks be made for all men, for kings and all who are in authority, that we may lead a quiet and peaceable life in all godliness and reverence.”

It was President Franklin D. Roosevelt who said, “I ask that our people devote themselves in a continuance of prayer. As we rise to each new day, and again when each day is spent, let words of prayer be on our lips.”

It should come as no surprise that members of the media describe such an occurrence as “strange.”

They really don’t know any better.

After all, 1 Corinthians 2:14 explains this phenomenon:

“But the natural man does not receive the things of the Spirit of God, for they are foolishness to him; nor can he know them, because they are spiritually discerned.”