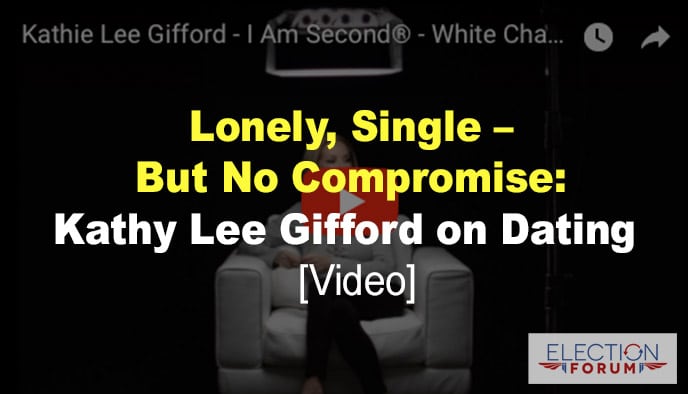 Kathy Lee Gifford – born Kathy Lee Epstein – became a Christian at the age of 12 … in a movie theater … after watching the Billy Graham film, The Restless Ones.

She says it was the greatest decision she has ever made – in her entire life.

In her “White Chair” video, I Am Second®, she describes feeling unhappy at one of the schools she attended growing up … because she felt the school wanted everyone to look alike … sound alike … think alike.

“That’s the exact opposite of what God wants us to do,” she says.

“God wants us to sing our own song, writ our own story, put on our own show. That’s the joy of living … That’s the adventure of a lifetime.”

In reflecting on her career in entertainment, she starts dating in uniform where men have the same nature and revelation in life as she was… and on her 29-year marriage to Hall-of-Fame football player Frank Gifford – and his death in 2015 … Kathy Lee says, “I’ve been in the desert as many times as I’ve been on a mountain top.”

“But I’ve learned my deepest lessons from the deserts … for sure.”

With her parents gone … her husband gone … and her 2 children living far away … Kathy Lee says, “My biggest struggle at this point of my life is loneliness.”

So, she’s adopted a motto: She tells herself each morning when she wakes up … ‘If I have a pulse, I have a purpose.’

She recently broke off seeing someone because he didn’t share her passion for Jesus.

She told him, “My faith isn’t something I do on Sunday mornings for an hour. My faith is me, and I’m not going to share my life with somebody or even another hour of my life on a date with you if you don’t share the same passion for your faith as I do.”

She says her joy is non-negotiable…

Her advice: “Understand where your joy comes from, and then you protect it with everything in you.”

Jesus said that in this world His followers will have tribulation, “but take courage; I have overcome the world.” (John 16:33)

And Kathy Lee adds her own take on what Jesus meant: “And because I have, I will empower you to overcome your world.”

3 Comments on “Lonely, Single – But No Compromise: Kathy Lee Gifford on Dating [Video]”