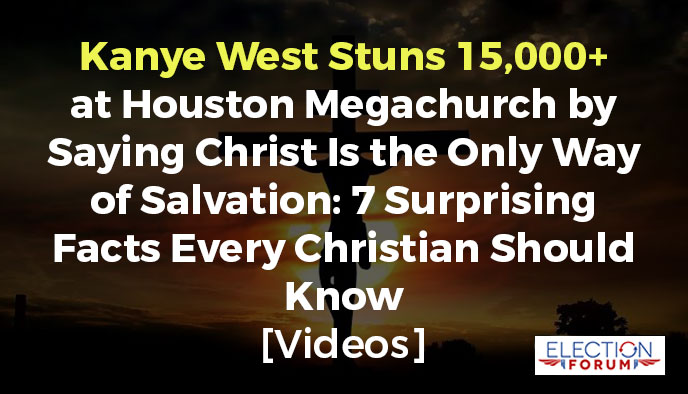 At times the huge audience cheered and applauded…

At other times they sat in stunned silence…

My wife and I watched the service as without compromise, West proclaimed the need for a personal relationship with Christ.

Here are 7 things you should know about Kanye West:

1. He has Christian roots.

2. After turning away from God, a spiritual transformation began to take place in his life.

He testified that he reached “the lowest point” in his life a little more than a year ago when he checked himself into a hospital as a result of physical and emotional exhaustion – what he describes as a “mental breakdown.”

It was while he was in the hospital that he believes God called him to start a church – but not a traditional church.

It started as a small outdoor gathering of family and friends in Calabasas, California.

West says that after about 4 months, he accepted Jesus as his Lord and Savior and was born again. That’s around the time the “Sunday Service Experience” – as he calls it – took off and grew into the extravaganza it is today.

3. People are coming to Christ at his “Sunday Service” concerts.

At the Forum in Inglewood, California, West’s powerful concert resulted in hundreds accepting Christ. Most who came forward had never been to church before.

In Houston, West performed his concert at a prison and also at Joel Osteen’s huge auditorium. Repentance and revival took place at both events.

The entire service he performs often lasts between 2 and 2 ½ hours … with a Billy Graham-style alter call at the end to accept Christ.

4. Kanye West is reaching people that might not otherwise be reached.

Whatever one may think of the gaudiness of the entertainment and the brash cockiness of West, one cannot deny that:

5. The secular world is laughing and mocking.

He is under intense attack. All Christians should be praying for him.

Many Christians are posing questions and casting doubt on the sincerity of West’s conversion.

Some think he has been genuinely born again … while others think he’s a fraud … or worse.

Some say his new evangelistic antics are just a publicity stunt to increase sales of his latest album, Jesus Is King.

Many Christians think his arrogance and cockiness disqualify him from leading any type of Christian worship service … much less from being an effective evangelist that God can use to bring others to Christ.

Why are Christians so quick to judge other believers who are new to the faith but who have been given – by God’s grace – a large public platform from which to draw many to Christ?

We would do well to heed these words from Jesus’ Sermon on the Mount:

7. There’s no question that a transformation began in West’s life about a year ago.

You may not like Kanye West’s music style, but you must watch these videos…

You will be blessed.

These videos may help you to form a more intelligent and accurate opinion of Kanye West.

Is Kanye West really a Christian? Watch this video (about 12 minutes).

Watch this video that provides a thoughtful response to the Kanye West public announcement that he has given his life to Christ (4 minutes).

Here’s a video – with lyrics – of Kanye West singing “God Is,” one of the songs on his new album, Jesus Is King (about 4 minutes).

2 Comments on “Kanye West Stuns 15,000+ at Houston Megachurch by Saying Christ Is the Only Way of Salvation: 7 Surprising Facts Every Christian Should Know [Videos]”