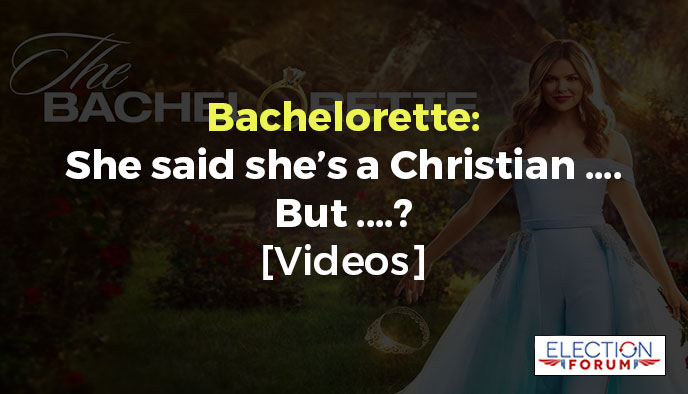 Millions of Christians watch The Bachelorette.

What they saw in the recently concluded Season 15 were two people claiming to be Christians … but who have totally different world views.

This year’s bachelorette, Hannah Brown – who won the Miss Alabama beauty pageant in 2018 – grew up in the Southern Baptist church and claims to be a Christian.

When she was a contestant on last year’s companion show The Bachelor, she was seen reading her Bible and writing in her journal.

This year she bungee-jumped naked on one of her dates … and thought it was okay as a Christian to have sex on a date in the “fantasy suite.”

Luke Parker – who wanted to be on the show because he knew Hannah was a Christian and wanted to meet her – let her know he had a problem with the naked bungee jump … and that he believed sexual intimacy should be reserved for marriage.

For standing up for his Biblical beliefs, Parker was characterized as the villain of the entire season.

He was vilified by Hannah Brown … by the other male contestants … by social media … and by the entertainment shows that report on each episode of the season.

The host of Entertainment Tonight – commenting on Mr. Parker’s Biblical morality – said, “Get it together, we live in 2019, not the stone age!”

There is constant pressure on Christians from our post-Christian culture to compromise their Biblical beliefs. This is especially true for Christians who are in the public eye.

Many have caved in under the pressure to water down and compromise their beliefs with the beliefs of the non-Christian culture in which we live.

In fact, Hannah Brown has more than compromised. She has decided that as an adult, she has the right to decide for herself what is right and what is wrong.

Some Christians may believe that New Testament grace has made obsolete the moral standards and requirements of the Bible. But it has not.

To those who think they have the right to decide what to do with their own body, the apostle reminds us in his first letter to the church in Corinth:

And later in the same letter he says, “Flee immorality. Every other sin that a man [or a woman] commits is outside the body, but the immoral man [or woman] sins against his [or her] own body. Or do you not know that your body is a temple of the Holy Spirit, who is in you, whom you have from God, and that you are not your own? For you have been bought with a price: therefore glorify God in your body.” (1 Corinthians 6:18-20)

Watch the discussion about sex between Hannah Brown and Luke Parker. It’s in three parts (about 12 minutes total).

Afterwards, Luke tweeted to Hannah that the “difference in how we view sin is seen in the response. I’m weeping at mine and you’re laughing at yours. All sin stings. My heart hurts for both of us.”

Watch this 4-minute video in defense of Luke Parker.