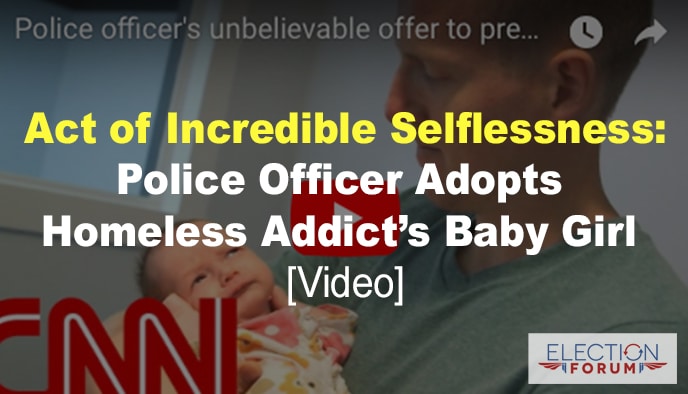 Some would label the incident a random coincidence…

But for Albuquerque police officer Ryan Holets, it was no coincidence … it was a divine appointment pre-planned by God.

It didn’t seem that way at first, however.

Last September, Holets responded to a possible theft at a local convenience store.

It sounded like just another routine call in a routine day. Not this time…

You see, the call turned out to be a false alarm … but as Officer Holets exited out the back of the store to check the area, he noticed a homeless couple sitting in the grass against a concrete wall.

He turned on his body camera and approached the couple…

They were shooting up heroin in broad daylight … and the woman was 8 months pregnant.

As Holets began lecturing the woman on how the drugs she was taking were going to harm her baby … she burst into tears.

Crystal Champ, 35, had been battling heroin and crystal meth addiction since she was a teenager.

She had tried to kick the habit but couldn’t.

She told Officer Holets she was desperately hoping someone would be willing to adopt her baby.

When he heard this, Officer Holets felt God telling him, “Tell her that you will do it because you can.”

Ryan Holets and his wife Rebecca already had 4 children of their own – the youngest being a 10-month-old baby.

But nevertheless, he offered … and Crystal accepted.

Ryan and Rebecca Holets adopted the baby and named her Hope.

Hope has already suffered the painful process of detoxing and withdrawals – and there’s a risk she will have developmental issues in the future.

For his extreme act of kindness and selflessness, Officer Ryan Holets was honored last January at President Trump’s State of the Union address