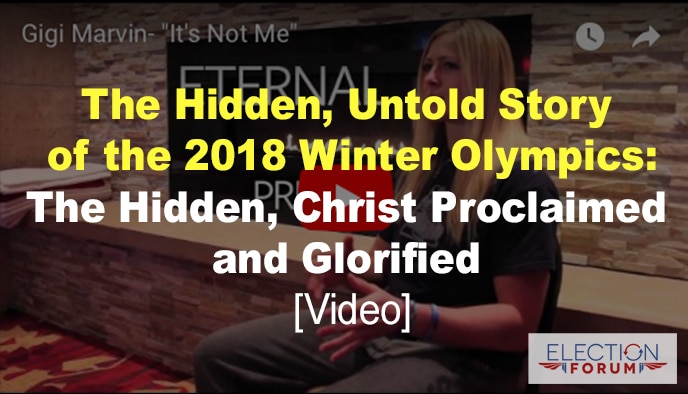 The U.S. media is very selective and biased in deciding what to report to the American people.

This is especially the case with respect to how God was powerfully proclaimed at the Pyeongchang Winter Games.

An estimated 3,000 missionaries – plus a coalition of 144 local South Korean congregations – staged outreach ministries during the Olympics.

About 2,000 worked in the city of Gangneung – the site of the indoor Olympic events – with the remaining 1,000 ministering in Pyeongchang.

Many welcome stations were set up in parking lots, where missionaries gave away snacks, coffee and Christian literature.

One local church in Gangneung included a live orchestra and had church members dressed in traditional costumes to attract visitors.

Among the Christian Olympians, several displayed Bible verses on their athletic equipment.

Here’s a summary of some of the experiences of the Christian athletes:

She’s the only snowboarder in history – male or female – to qualify for the Olympics 5 times.

Since becoming a Christian – which happened a year after winning her gold medal – she has been very outspoken about her faith to fellow snowboarders and fans.

She rides with a sticker on her snowboard that says, “Jesus, I cannot hide my love.”

She blogged that she’d be second-guessing herself for the next 4 years … wondering whether she had “choked in front of the whole world.”

This year, she and her new teammate, Lauren Gibbs, won another silver medal … edged out by a mere 0.07 seconds by a team from Germany.

The two teams went back and forth trading new track records during the 2-day event.

On their last run, Meyers-Taylor and Gibbs – who were trailing by 0.04 seconds at the time – moved into 1st place … but were edged out by the German team on their final run.

“I won’t be writing the same blog” this time, Meyers-Taylor said. “I am so proud. All you can ask of yourself is to go out there and give your best, and I truly believe I gave my best.”

In 2016 – two years after the disappointing loss in the 2014 Winter Games – Meyers-Taylor came to the conclusion, “I know that God is working through me within this sport. I know He’s put me here for a purpose and it’s not just to win medals.”

“Faith plays a huge role because it enables me to be confident,” Wise said in 2014.

“I don’t have to worry about what’s happening or the outside influences as much because I feel like I can trust God, and He’s going to see me through.”

David and his wife Lexi are youth group leaders at their church, and Wise meets weekly with two friends who have helped him grow spiritually.

Wise believes that life isn’t always about what happens to you – it’s about how you approach what you have in front of you.

But not this year.

In a match reminiscent of the “Miracle on Ice” 38 years ago – when the men’s hockey team edged out the Soviet Union in Lake Placid – the women’s team defeated Canada in an exciting shootout after the match had ended in a tie at the end of regulation.

Team leader Gigi Marvin – a 3-time Olympian and, at 30, the oldest woman on the roster – said before the match, “My mission is more than winning another medal or championship. It’s about sharing Christ and leading others to Him. I know my worth is not found in what I can achieve in this game. Instead, my identity and value is found only in Christ, my Redeemer and Lord.”

She says, “My faith has calmed me down on the ice and helped me realize too that the result is not necessarily the most important thing.”

It was their first Olympic Games after Alexa had developed a life-threatening stomach illness resulting in 3 abdominal surgeries … causing her to doubt whether she would ever regain her previous strength and athleticism.

“I may have lost a lot of faith in myself, but I grew with my faith in God,” she said.

“I have some insecurities now that I didn’t have before, but I’m able to work on it and move forward because I’ve shifted my focus and my attention to my faith instead of myself.”

The accomplishments of the Olympic athletes will fade from memory over time … but what God accomplished through many non-athlete and athlete missionaries will last for eternity.

“For as the rain and snow come down from heaven, and do not return there without watering the earth and making it bear and sprout, and furnishing seed to the sower and bread to the eater; so will My word be which goes forth from My mouth; it will not return to Me empty, without accomplishing what I desire, and without succeeding in the matter for which I sent it.” (Isaiah 55:10-11)

Watch this short 1 ½-minute video of Gigi Marvin talking about not being on Team USA but on Team Jesus Christ: