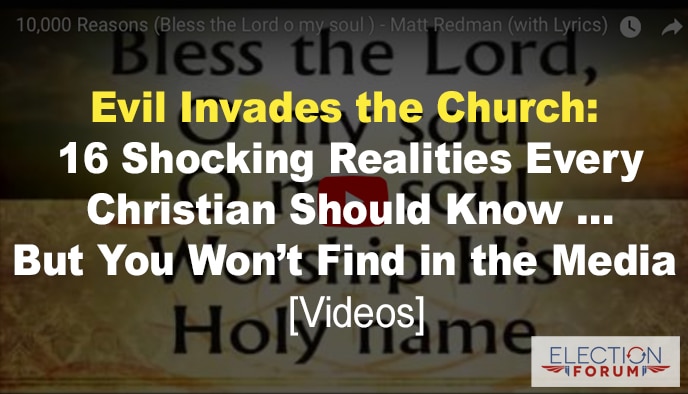 It was the deadliest mass shooting in Texas history and American church history.

A madman opened fire, killing 26 and wounding 20 in a small church in Texas.

If you only are getting your news from social media or the liberal biased media for updates, you wouldn’t have seen some critical facts and events you should know about regarding this horrific slaughter of innocent men, women and children.

Here are 16 things to know about this tragic event:

The Christians were killed right after worship and prayer, with no time or place to escape.

He did not regard the dignity of human life. A Christian worldview sees every human as precious and of eternal value.

As a Christian, murder is not just a crime, but an assault on the dignity of a sacred creation of God … an assault on one made in the image of God.

Some atheists may condemn what Kelley did, but they have no objective truth to guide a moral judgement.

By law, he should never have been able to buy a gun. He was able to do so because proper authorities were never notified. If they had been, he would have been blocked from buying a gun during a routine FBI background check. The Air Force, like other government bureaucracies, are bloated and inefficient.

Gun control failed in this case. What good are laws and policies if they are not followed? More gun control will not prevent the innocent in churches or elsewhere from killers like Kelley.

In this case, we all wish someone in the church could have stopped him. And thank God, someone on the outside did help save others.

Incidentally, I hope the medical records come out to show whether Kelley was on multiple prescription medications … something the military has prescribed to hundreds of thousands of soldiers.

Around the world, the media, including TV, was showing video of last week’s church service, interviewing Christians and showing people of faith praying and worshipping God. Wow!

The fact is, the media didn’t understand what it was doing when it was showing last week’s church service to millions of people — that people who knew of this church were on the air proclaiming Jesus Christ’s death and resurrection on the cross. The gospel went forth in a powerful way in the midst of tragedy.

Just look at these Tweets:

“If prayers were the answer to gun violence, wouldn’t people at a church service be safe? Please make gun laws.”

“The murdered victims were in a church. If prayers did anything, they’d still be alive.”

As Christians we recognize prayer is an act of obedience to God and His will for us to communicate with the true and living God.

Prayer is not controlling God according to us, it’s based on a personal relationship with Jesus Christ. He is the victor over evil and He is the comforter of the hurting.

The reality is, it’s not gun control that is going to stop this type of violence. It’s revival – revival for God in the hearts of men and women across America.

One of the unique twists to this horrific incident was that CNN and other media outlets kept talking about the fact the church put its prayer services on YouTube. And they kept referring to the services, sometimes showing portions of the services.

When I first saw the video of last week’s church service, only 200 people had viewed it. Now, more than 700,000 have seen it. You can watch it below.

We as the people who follow Christ must be in prayer for our brothers and sisters who are hurting, for the families that have been ripped apart, and for our nation – for all those who are impacted by this tragic event.

In regard to the service the week before, it was like a prophetic word by the pastor preparing his people for slaughter, including his own daughter.

He talked about Proverbs 3:5: “Trust in the Lord, don’t lean on your own understanding,” if it doesn’t make sense. “God’s got it figured out, whether we do or not,” said the pastor.

You will be stunned if you watch the service above, as the pastor says trust in the circumstances and forces you can’t see. Work with it rather than against it. Look beyond your focus and what’s ahead of the curve.

They sang Matt Redman’s “10,000 Reasons,” about loving God until it’s time to come home to the Lord.

Texas Gov. Greg Abbott prayed, yes, prayed in public. And during an official news briefing with the Sheriff’s, FBI and other government people the world witnessed the gospel. The Sheriff at the end did the improbable. He called for a pastor to close in prayer. The pastor delivered the message of the Cross, hope and love in word and prayer.

As one security analyst said, the Left believes you can legislate evil out of people’s hearts, but you can’t. Don’t be sheep. Be vigilante. We live in a different world today. We are commanded to defend ourselves:

“Rescue the weak and the needy; deliver them from the hand of the wicked” (Psalm 82:4).

Churches are at greater risk for harm than ever before. Meeting times are posted and anyone is welcome. Most church buildings have multiple points of access. Few churches have security personnel or policies in place.

Some congregations resist employing security guards, worrying that they will frighten children and distract from worship. But the church duty is to protect everyone.

Across the world, persecution of Christians is happening, including the Middle East and Egypt, India, Nigeria. One Christian is killed every 30 minutes.

Fear not and trust in the Lord. There are two Scriptures that remind us that following Christ is not without its perils:

“All who desire to live a godly life in Christ Jesus will be persecuted” (2 Timothy 3:12).

Christians are persecuted the world over, yet when it happens here at home, it shocks us into reality.

Why are peaceful and loving Christians under attack, when other world religions are not persecuted as violently?

The answer is simpler than you may think.

It is because Jesus Christ is the Way, the Truth and the Life, and there is no other way to salvation and heaven but through Him.

And Satan knows it. He also knows his time is coming to an end.

It’s time the world knew it, too.

Yes, as Christians we face persecution, but we are not to lose heart in the face of this adversity.

Not only will good always overcome evil, but we live on a promise Jesus gave us:

“Blessed are those who are persecuted for righteousness’ sake, for theirs is the kingdom of heaven” (Matthew 5:10).

“Love your enemies and pray for those who persecute you” (Matthew  5:44).

Finally, with these three powerful videos that speak insightfully to this tragedy.

Pastor Robert Jeffress talks about trusting God in the darkness.

Texas Gov. Greg Abbott gives an emotional plea for God’s comfort and guidance in the wake of the church shooting.

4 Comments on “Evil Invades the Church: 16 Shocking Realities Every Christian Should Know … But You Won’t Find in the Media [Videos]”