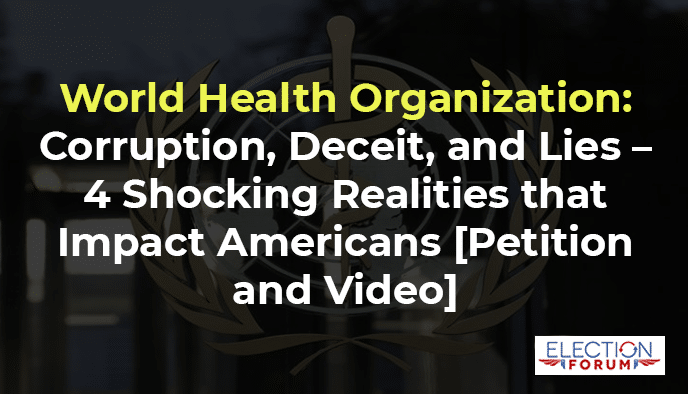 The news media treat the United Nations World Health Organization as the number one authority on health.

So do the politicians.

So do people on social media.

Bu they are wrong.

Here are 7 shocking things you should know about the corruption, deceit, and lies of the World Health Organization:

1. The World Health Organization (WHO) is a public relations organization for China. It’s not an independent, scientific voice for health.

The WHO is an unofficial public relations arm of the Communist Party.

It is not independent.

During the Chinese Coronavirus outbreak, the WHO:

The WHO has been a tool used by China to convince the world:

2. The WHO helped to cover up and delay releasing the truth about the Coronavirus.

Their coverup of the truth caused a delay in America and around the world to take action to protect people, work on vaccinations and cures … and even to begin to understand the virus.

The WHO covered up and ignored that China arrested and punished whistleblower doctors who tried to warn the world about the virus.

Some of those who were arrested died … others simply disappeared.

As early as last December, hospital doctors and nurses in Wuhan knew that the Coronavirus was being transmitted from human to human … yet the Chinese government and the WHO denied it.

Even in January of this year, the WHO said, “Preliminary investigation conducted by the Chinese authorities have found no clear evidence of human-to-human transmission of the novel Coronavirus (2019-nCoV) identified in Wuhan, China.”

Besides acting as China’s puppets, the goal of WHO officials is to grow government control…

Their chief strategy to increase government control is to spread lies…

For example, to scare politicians, the media and people worldwide, the WHO exaggerated their potential death rate projection.

The current Director-General of the World Health Organization is Ethiopian politician and academic, Dr. Tedros Ghebreyesus. To everyone’s horror, he claimed that COVID-19 had a mortality rate of 3.4% compared to the annual estimated flu mortality rate of 0.1%.

4. The WHO is a failed United Nations-run group that U.S. taxpayers should not support.

U.S. taxpayers are paying the WHO to spread lies and propaganda.

The WHO doesn’t even recognize the existence of the Republic of China (Taiwan).

Also watch this 3 ½-minute video of the Director-General of the WHO praising China’s “transparency” in “immediately” sharing information with the world about the Coronavirus outbreak in Wuhan.