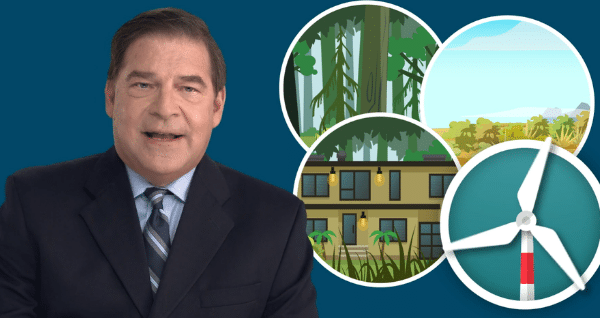 These massive fires are exploding. But you’re not being told why…and that they can be prevented.

It’s a nightmare…homes, businesses and churches burnt to the ground.

Beautiful and historic areas are torched.

It’s not a mystery.

But you’re not being told the truth.

The news media is distorting the truth.

The politicians are lying.

Here are nine myths, distortions, and lies so you know what is happening.

It’s a fact that forests and brush areas under state and national ownership are catastrophically overgrown … often having 4 times the number of trees per acre the land can support.

For example, in the Stanislaus National Forest – the location of a massive wildfire– the tree density was about 300 trees per acre according to the fire officials battling that blaze.

Also, nearly 130 million dead trees in California and other states are like matchsticks and kindling when a wildfire is ignited…

The property where I have a home in the San Bernardino mountains – and my neighbor’s property – isn’t overgrown because it’s our private property.

But behind my back yard – and next to my side yard – is a thick, dangerous tinder box of overgrown trees and brush.

Because there is no private ownership of the land or the trees in the San Bernardino National Forest. It’s all run by the government. And the political ideology is to not cut trees-even dead ones. And there is no incentive for anyone to clean any area.

2. The ideologically driven politicians and media are using the massive wildfires to push their political agenda of climate change.

For the past 10 years, they have been blaming droughts, wildfires and extreme weather on climate change…

They call those who are skeptical about climate change “deniers.”

The politicians and media think the solution is for everyone to get on board to stop climate change with costly government run programs that have huge unintended negative consequences.

This ignores the real problem…

3. Bureaucratic mismanagement and environmental regulations – not climate change – exacerbate the spread of wildfires.

The current leaders of the government agencies-unable to be removed by President Trump or responsible State Governors-that are responsible for forest management are ideologically driven to:

1. Not manage the national forests, allowing them to grow to dangerous, unhealthy and out-of-control levels, and

2. To blame “climate change,” not themselves, for the consequences: fires that rage out of control instead of being restrained by fire breaks and by forest-thinning and other well-known fire suppression strategies.

4. There is no logical or scientific evidence that “climate change” – the new term for global warming – causes or exacerbates wildfires.

For one thing, warmer weather can’t produce the spark or flame that’s necessary to start a fire.

Second, periodic droughts accompanied by hot, dry summer weather have occurred in the West and Southwestern U.S. for decades without any increase in the number or severity of wildfires.

The actual physical causes of the wildfires in the west and south are varied. California have not yet been determined. Arson is the suspected cause in some: lighting in others. Powerlines are the cause of fires in California.

Third, if wildfires were being caused by global “climate change,” we should expect the burned acreage worldwide to be increasing each year.

Regarding the numbers of large wildfires, Former Interior Secretary Ryan Zinke said it well: “I’ve heard the climate change argument back and forth. This has nothing to do with climate change. This has to do with active forest management.”

It’s also worth noting that if climate change were to blame for wildfires, private lands would be impacted to the same extent as public lands.

5. Positive actions that could reduce the severity of wildfires are being rejected by government and union leaders.

Instead, they want the government to hire more union firefighters at a cost of $150,000 or more annually.

And the more homes that burn down, the greater chance they have of reaching their goal.

They’ve hired private firefighters to protect their home as LA flies up in danger… and the other homes in their Hidden Hills, California neighborhood.

California fires have been recorded from the first settlers to now.

California is like a hot desert with big wind gusts in the summer.

Dense brush and overcrowded forests are a perfect trigger for a spark.

Former Socialist Governor Jerry Brown and the California legislature declare that by 2045 California would only have renewable energy like wind and solar.

That put all the electric energy components to shift priorities away from fixing old and dangerous infrastructure to new solar and wind experiments.

The old, antiquated powerlines instead of being replaced, are ignored.

In the tragic fires of 2018, over ½ of the wildfires were started by powerlines.

Most of California electrical towers were built before I was born-before 1950.

In 2018, Paradise California burnt to the ground.

Homes, businesses, churches. Over 10,000 burnt to the ground.

Its fire was caused by old equipment dating back to 1921. Instead of fixing it, Pacific Gas and Electric (PSE) focused state required green “energy”.

Now, there are blackouts in California where there is fire danger, because the infrastructure is so dangerous.

7. Federal and state bureaucrats have the power and the resources to save the forests … save property and lives … and stop wildfires from spreading.

They could reopen public meadowlands and brush ones to grazing by cattle, horses and other animals.

8. Other steps can be taken to prevent wildfires from starting … and to keep them from spreading when they do start.

9. Government bureaucrats refuse to take any responsibility for exacerbating the spread of wildfires and the destruction they cause.

They will never admit to any wrongdoing…to any neglect of forest management…or to any culpability with respect to the wildfires.

They will never admit that the lawless or terrorists setting fire should be stopped.

They will never admit that the Green Deal Policies have allowed the electoral grid to be dangerous and destructive.

Watch this PragerU video (before YouTube takes it down) on how government, politics, not climate change, is the source of the wildfire. Click here for this 5-minute video.

Their agenda and their takeover strategies are all documented in my book, The Deep State: 15 Surprising Dangers You Should Know.

You can get a copy directly from me – or from Amazon (either hardcover or Kindle version) – by clicking here.

2 Comments on “Wildfires Explode: 9 Myths, Distortions, and Lies by the Media and Politicians [Video]”