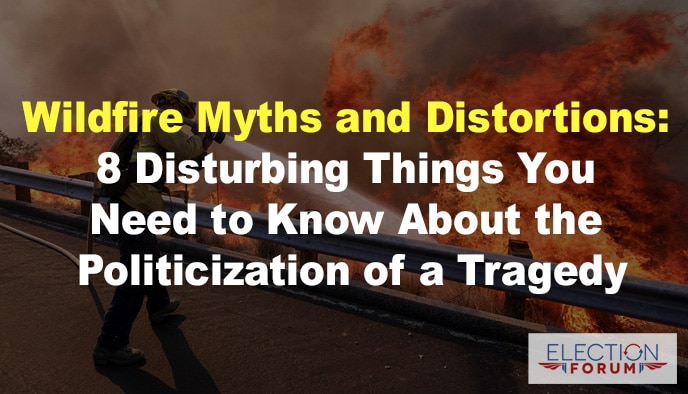 The nation is saddened as we hear about loss of life and people’s homes during devastating wildfires.

California, for example, has become a nightmare.

Many churches as well as businesses and historic structures have been destroyed.

President Trump sent his condolences, but at the same time attacked the fact that forest mismanagement has been going on in California. This prompted Jerry Brown and the progressives to use the opportunity to promote global warming.

Gov. Jerry Brown is using the wildfires to campaign for climate change legislation that won’t address the problem.

Here are 8 disturbing things you need to know about the politicization of wildfires:

For the past 8 years, he has been blaming droughts, wildfires and extreme weather on climate change…

He calls those who are skeptical about climate change being man-made “freeloaders” and “deniers.” He mocks residents who maintain “little green lawns.”

In a recent press conference, he stated, “Managing all the forests everywhere we can does not stop climate change, and those who deny that definitely are contributing to the tragedies that we are witnessing and will continue to witness.”

He also said, “This is not the new normal. This is the new abnormal, and this new abnormal will continue certainly in the next 10 to 15 years. We have a real challenge threatening our whole way of life.”

And he thinks the solution is for everyone to get on board to stop climate change.

One proposal that was made 15 years ago – after a wildfire destroyed 330 homes in San Diego – is to establish a large supplemental fire brigade – consisting of trained volunteers – to help protect neighborhoods from destruction caused by erupting ember fires.

Instead, they want the government to hire more union firefighters at a cost of $150,000 or more annually.

And the more homes that burn down, the greater chance they have of reaching their goal.

They’ve hired private firefighters to protect their home … and the other homes in their Hidden Hills neighborhood.

Unfortunately, several Hollywood celebrities have lost their Malibu homes. Among them:

In another act of sheer political demagoguery, Governor Brown vetoed a bipartisan wildfire management bill in 2016 – even though it passed unanimously in both the state assembly and the state senate.

Because it would have given local governments more say in fire prevention efforts – meaning less state control over firefighting policy.

For one thing, warmer weather can’t produce the spark or flame that’s necessary to start a fire.

Second, periodic droughts accompanied by hot, dry summer weather have occurred in the southwestern U.S. for decades without any increase in the number or severity of wildfires.

The actual physical causes of the 3 currently active wildfires in California have not yet been determined. Arson is the suspected cause of at least one of them.

Third, if wildfires were being caused by global “climate change,” we should expect the burned acreage worldwide to be increasing each year.

Regarding the increasing numbers of large wildfires, Interior Secretary Ryan Zinke had this to say: “I’ve heard the climate change argument back and forth. This has nothing to do with climate change. This has to do with active forest management.”

It’s also worth noting that if climate change were to blame for wildfires, private lands would be impacted to the same extent as public lands.

This being said, it’s a fact that forests under state and national ownership are catastrophically overgrown … often having 4 times the number of trees per acre the land can support.

For example, in the Stanislaus National Forest – the location of a massive wildfire this year– the tree density was about 300 trees per acre according to the fire officials battling that blaze.

Also, nearly 130 million dead trees in California’s forests are like matchsticks and kindling when a wildfire is ignited…

The property where I have a home in the San Bernardino mountains – and my neighbor’s property – isn’t overgrown because it’s our private property. But behind my back yard – and next to my side yard – is a thick, dangerous tinder box of overgrown trees…

Because there is no private ownership of the land or the trees in the San Bernardino National Forest.

The current leaders of the government agencies responsible for forest management are ideologically driven to:

They could reopen public meadowlands to grazing by cattle, horses and other animals.

They will never admit to any wrongdoing … to any neglect of forest management … or to any culpability with respect to the wildfires.

Their agenda and their takeover strategies are all documented in my new book, The Deep State: 15 Surprising Dangers You Should Know.

You can get a copy directly from me – or from Amazon (either hardcover or Kindle version) – by clicking here:

11 Comments on “Wildfire Myths and Distortions: 8 Disturbing Things You Need to Know About the Politicization of a Tragedy”