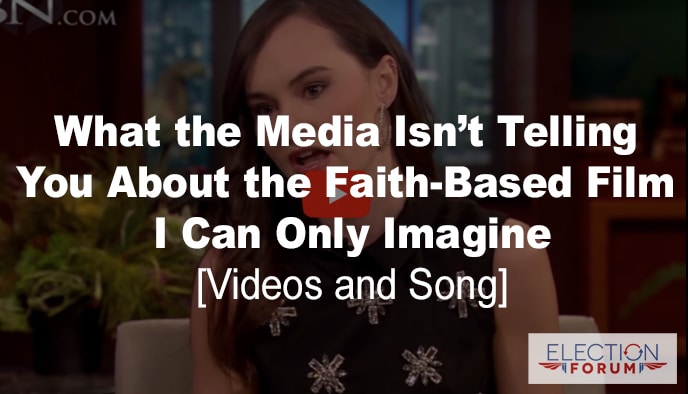 The media has tried to ignore the film – and the song – but their impact on people’s lives is powerful – and growing.

One example: Hollywood, Alabama Police Chief Jason Helper lip-synced the song “I Can Only Imagine” for a Lip Sync Battle initiative sponsored by K9s4Cops…

The video has tallied over 50 million views!

You can watch the lip-sync video on the K9s4Cops Facebook page: https://www.facebook.com/K9s4Cops/

Of the song, Helper said it “has been there for me in some of my darkest hours when I was at the lowest points – whether caused by bad decisions or because of things I was dealing with seeing from work – this song would be my ‘go to’ when I needed some uplifting…”

Currently, the total box office earnings of the film are over $85 million … not bad for a movie that only cost $7 million to produce.

And it has remained in the top 3 in total DVD sales in each week since its release.

It’s the true-life story of Bart Millard – lead singer of the Christian band MercyMe – who grew up with an abusive father who eventually came to Christ late in life.

Bart Millard’s story is emotional … inspirational … and powerful … and the film does a remarkable job of retelling it.

You can order the DVD of the movie here: https://icanonlyimagine.com/

You can learn more about the cast of I Can Only Imagine here: https://icanonlyimagine.com/thecast

Watch this interview with Madeline Caroll, who plays Bart Millard’s girlfriend Shannon in the movie (7 ½ minutes):

Watch this interview with Bart Millard telling the story of how he wrote the song, “I Can Only Imagine” (6 minutes):

Listen to Bart Millard singing his song “I Can Only Imagine” here (6 minutes):

What do you think?  Write me at craig@craighuey.com.