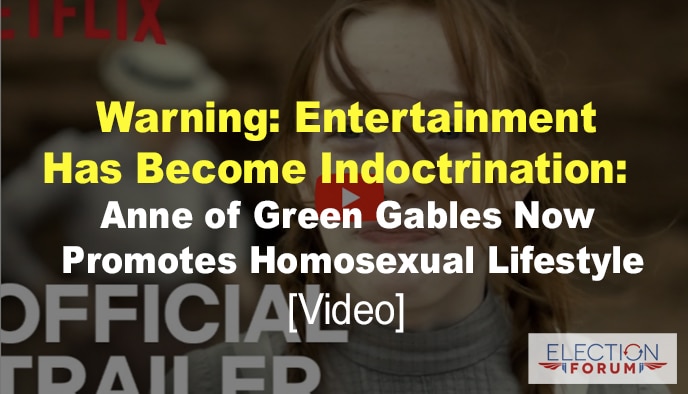 My wife and kids love Anne of Green Gables.

In fact, my wife and I just told everyone they should see Anne of Green Gables on Netflix because it’s so good…

But we sadly warn everyone not to watch the new season.

Because nothing is safe anymore from the clutching tentacles of progressive political and sexual ideology – not even classic children’s literature and television.

Family-oriented entertainment is being turned into propaganda.

But you wouldn’t know it from the content that’s being added to season two of the Netflix adaptation of the story … called “Anne with an E.”

The message Netflix is clearly sending to all children and adolescents who love Anne of Green Gables is that homosexuality is good … and should be celebrated.

In one episode, Anne, her friend Diana, and a boy named Cole attend a gathering of cross-dressing men and women at the home of Diana’s great aunt Josephine…

The group has gathered to honor the memory of Josephine’s departed “partner,” Gertrude.

As she observes the people around her, Anne says to Diana, “Isn’t this the most amazing group of people!”

Later, after Anne makes a comment about Josephine and Gertrude being “married,” Diana – who hadn’t been aware of her great aunt’s relationship with Gertrude – tells Anne their love affair was “unnatural.”

But Cole – a character who was invented for the Netflix series – straightens Diana out when he says, “If your aunt lived her life feeling … that she was broken, defective, or unnatural, and one day she met someone that made her realize that wasn’t true … shouldn’t we be happy for her?”

Cole later confesses to Aunt Josephine that he thinks he is “like you and Gertrude.”

“You have a life of such joy before you,” Aunt Josephine replies.

Remember, the moral relativism and promotion of homosexuality in this Netflix series is specifically targeting young children and pre-teens.

Here’s the official Netflix trailer for Season 2 of “Anne With an E.” It’s touted as a family-oriented series … and it seems benign on the surface. But if you watch closely, you will see clear hints of pro-homosexual content … content that Netflix doesn’t want you to notice until you’ve been persuaded to watch every episode. (2 minutes):